More than 16 percent of the drinking water wells tested near Fort Jackson during the past six years have shown contamination from a toxic chemical found in hand grenades used at the military installation to train soldiers, according to recently released federal data 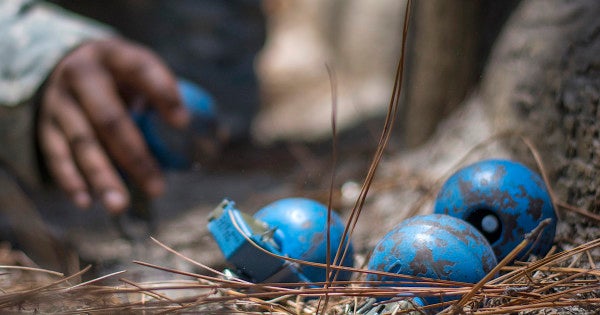 More than 16 percent of the drinking water wells tested near Fort Jackson during the past six years have shown contamination from a toxic chemical found in hand grenades used at the military installation to train soldiers, according to recently released federal data.

In some cases, the pollution levels are high enough to exceed federal safety advisories for RDX, a chemical that can cause seizures and cancer in people from long-term exposure. In others, RDX in private wells has fallen within safe drinking water limits, Army officials and state regulators reported this week.

But the finding of any RDX, short for royal demolition explosive, is a concern.

Some people are worried because the Army continues to use hand grenades laced with the toxic material. The areas where Fort Jackson has found RDX on the base — and where soldiers train — are uphill from neighborhoods across Leesburg Road, many of which rely on wells for drinking water. And the water flows from the military base in the direction of many homes.

RDX is an ingredient in hand grenades that makes them explode. Fort Jackson officials have estimated that soldiers throw 100,000 hand grenades a year at the base, but they think the pollution along Leesburg Road was caused from training soldiers decades ago.

Matt Torkelson, a former drill sergeant and explosives inspector at Fort Jackson, said current training should not be dismissed as a possible source. The base's continued use of hand grenades to train soldiers is understandable and necessary, but it threatens water supplies, he said.

“It can contribute to the continuation of groundwater contamination,'' Torkelson said. “We are talking about chemicals that can seep through the ground and sit there for an extended period before it gets rolled into groundwater.

“Every hand grenade that is thrown there is leaving a little residual RDX on the earth.''

Fort Jackson base officials said they've taken measures to prevent RDX from leaving the base and flowing toward private wells in neighborhoods across Leesburg Road. They are treating soil with lime to neutralize RDX that threatens groundwater.

In addition, for people with wells contaminated above federal safe drinking water standards, the base has supplied bottled water and installed water filtration systems to keep the toxic compound out of tap water.

RDX is a man-made compound that can cause seizures in people who swallow substantial amounts, and it is considered a potential human carcinogen for those exposed over time. The chemical has been used in hand grenades at Fort Jackson for decades.

Records show that the military needs RDX for grenades.

“RDX is a component of hand grenades and a few other munitions that are currently used to train soldiers,'' according to an Army fact sheet. “There are no alternatives that provide a realistic experience for our young men and women.''

The contaminant was found in groundwater at Fort Jackson six years ago as part of an Army initiative to check military bases for pollution from explosives. At first, the Army reported that it had not found unsafe levels of RDX pollution in groundwater wells off the base. But further testing in 2014 found elevated levels of RDX in wells that served five homes across from Fort Jackson.

Since 2013, the Army has conducted more than 800 tests involving 186 wells off the military base, finding 31 wells polluted by RDX. That's 16.6 percent. Of those 31 wells, 16 exceeded federal standards for safe drinking water or were over a risk limit established by the federal government, according to data released this week by Fort Jackson and the S.C. Department of Health and Environmental Control.

Susan Hall, who lives on a dirt and gravel road below the base, said the Army isn't doing enough.

She says Fort Jackson should test all drinking water wells in the area, instead of just for selected people. Hall said she worries that a historic flood in 2015 dispersed pollution from the base into her community's groundwater, which worsened the RDX problem.

“I understand the military's part, but let's don't be like Russia, where we just kill our people and don't give a crap,'' said Hall, who said Fort Jackson has not tested her well. “This is America. You are supposed to care what you're doing to other people. It would be nice if they did check it. That would be awesome.''

Fort Jackson says it will test wells for those who request it and grant the base permission. The base now is testing about 75 wells annually, according to a July 22 update from the fort.

One resident of Old Leesburg Road, who asked not to be identified for fear she could not sell her house, said RDX has shown up in her water consistently since testing began in 2013. The levels do not exceed safe drinking water standards, but the contamination also isn't going away — a factor that could hurt her property values, she said, noting that she purchased the home just before the Army announced groundwater had been polluted by RDX.

“If I had known about this ahead of time, I never would have bought this house,'' she said.

Despite concerns about RDX flowing off the base and into people's backyard wells, Fort Jackson said the most likely reason for the pollution is past military training activities. The Army once used about 18,000 acres south off the base as a training ground for soldiers. The area has developed since that time, with homes dotting the landscape.

“The RDX in off-post wells is not from our current hand grenade training, but is the result of historical training activities, possibly as early as the 1940s,'' according to Fort Jackson's July 22 update on well contamination.

Fort Jackson officials said they are investigating whether people whose wells contain unsafe level of RDX could be hooked up to the Columbia city water system. That would require construction of about two miles of water line, according to an update on the RDX contamination issue.

While the RDX issue has been identified in recent years, pollution on military bases is nothing new in South Carolina or across the country.

Military installations have had a legacy of poisoning groundwater and soil with an array of toxins, including solvents, heavy metals and petroleum. At one point in the 1990s, South Carolina had more than 100 individual military sites with known contamination, The State reported at the time.

Most recently, questions have surfaced about how an emerging and lightly regulated group of pollutants, known as perfluoroalkyl substances, are affecting groundwater and drinking water in and around bases. Fort Jackson is investigating impacts from these pollutants on the base. Some types of these chemicals are contained in firefighting foam military bases have used.

Officials at McEntire Air National Guard base in eastern Richland County and at Shaw Air Force Base in Sumter County also are investigating after finding contamination by perfluoroalkyl substances in groundwater, recent federal reports show.

Last week, the Department of Defense said it would establish a task force to study the impacts of chemicals from firefighting foam on military bases.