A transgender Air Force Academy graduate is being withheld lieutenant's bars because of what the academy calls a gap in... 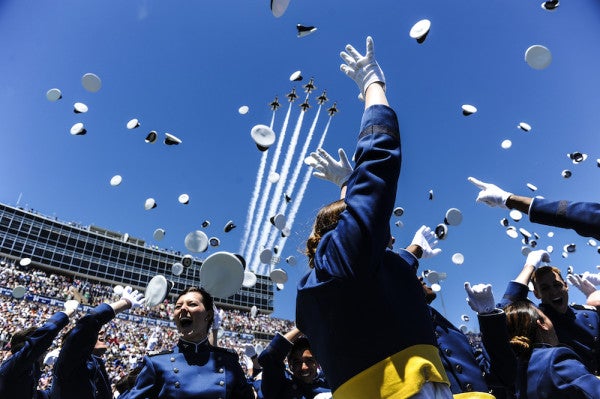 A transgender Air Force Academy graduate is being withheld lieutenant's bars because of what the academy calls a gap in Pentagon rules for transgender military recruits.

As a result, a recent graduate has been barred from receiving a commission, Heritage confirmed, declining to name the cadet.

Policies for recruits — or “accessions” in military jargon — were under review by the Pentagon and revised guidelines were expected by July 16, Herritage said.

“However, we are strongly recommending this individual for Air Force civil service as an option for continued service after the Academy,” the statement said. “The more than 140,000 Air Force civilians who serve along aside our uniformed Airmen everyday are essential to our mission to fly, fight and win in air, space and cyberspace.”

The civil service is a name for the federal's government's civilian workforce. Civil servants hold no rank and are not considered military personnel.

News of the cadet's limbo was reported May 10 by USA Today and again Thursday by The New York Times.

The unidentified cadet was one of two transgender service academy graduates caught up in an apparent loophole, the newspapers reported.

The Times quoted Brad Carson, former acting undersecretary of defense and architect of the change in transgender rules, saying that the authors “envisioned that the same rules that apply to active-duty service members today would also apply to service academy personnel, because they're already in the military.”

Herritage declined to say how long Air Force Academy brass had been on notice about the cadet's gender identity and impending issues surrounding graduation.

Academy graduates agree to serve as a commissioned officer for at least eight years after graduation, five of which must be active duty, with more stringent requirements for pilots, according to the academy's website.

Those who fail to meet their obligations can be made to repay costs of their education. An academy admissions website estimated that value at more than $400,000.

Whether a career in civil service satisfies those obligations is unclear. However, Herritage said, “if the civil service option was approved, the cadet would not incur any costs to pay back.”

Responding to a question by The Gazette, Herritage said the academy's move endorsing the cadet for the civil service shouldn't be interpreted to mean that it believes transgender recruits will be barred when rules are clarified in July.

“We're awaiting policy and in the absence of policy we're going to use our best judgment on a case by case basis,” he said.

He couldn't say if the Air Force Academy has previously accepted civil service as a substitute for eight years of service as an officer.

Herritage said he couldn't speak to the working group's recommendations thus far, and declined the newspaper's request for an interview with a member. He referred further questions to the Defense Department.