Days after the Supreme Court backed a Pentagon ban on transgender troops serving openly, an active-duty transgender sailor will appear as a guest of honor at President Donald Trump's State of the Union address in Washington, D.C. 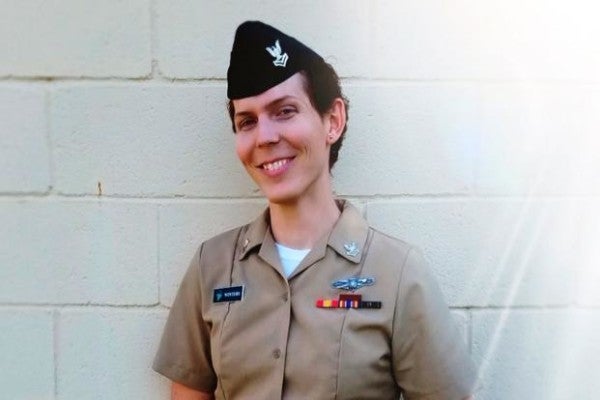 Days after the Supreme Court backed a Pentagon ban on transgender troops serving openly, an active-duty transgender sailor will appear as a guest of honor at President Donald Trump's State of the Union address in Washington, D.C.

Petty Officer 2nd Class Megan Winters will be the guest of Rep. A. Donald McEachin, D-Virginia, at the State of the Union on Feb. 5, according to a release from the congressman's office. Winters, 30, was a plaintiff in a lawsuit by the organizations Lambda Legal and Outserve-SLDN challenging the ban.

The policy approved by then-Defense Secretary Jim Mattis last year was not the across-the-board prohibition proposed by Trump via Twitter in 2017, but would keep most openly transgender individuals from enlisting and limit the ability of currently serving transgender troops to come out and transition.

Winters, now assigned to the carrier George H.W. Bush in Norfolk, Virginia, is a constituent of McEachin's who has been vocal about her position, giving interviews to PBS and The Associated Press, among others, about her position.

“I do my job to the best of my ability every single day and will do that as long as I'm able to,” she told the AP in January. “I recall how I felt the first time I put on the uniform. I genuinely wish that upon any American who wishes to serve.”

In a release, McEachin said he wanted to recognize Winters for her service in the Navy and give more visibility to other transgender service members.

“As many as 15,000 transgender individuals currently serve in the U.S. military, and they deserve our utmost respect and gratitude,” he said in a statement. “Unlike our current commander in chief, I will always support and defend the brave members of our military.”

On Jan. 22, the Supreme Court released a 5-4 decision that it would not take up three cases challenging the proposed ban. Several lawsuits continue in lower courts, however. The Pentagon has yet to begin enforcing its transgender policy as one nationwide injunction against it remains effective, tied to an ongoing case in Maryland Federal District Court.

Winters told the AP she would abide by the Pentagon's transgender policy if enacted, but hoped for the opportunity to remain in uniform.

“I want to tell you I stand steadfast and hold my head up high, but it is a little difficult,” she said in the interview. “The president of the United States is my commander in chief. If they called for the end of transgender service, if it's a lawful order, I would have to obey it. But I truly want to continue serving my country.”

WATCH NEXT: What It's Like Being Transgender In The Military