Two major political developments Sep. 15 — one in the form of a memo from Defense Secretary James Mattis, and … Continued 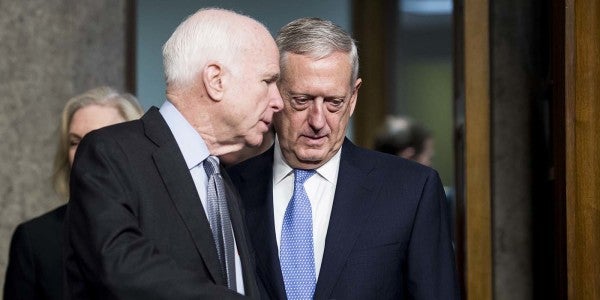 Two major political developments Sep. 15 — one in the form of a memo from Defense Secretary James Mattis, and the other a bill advanced by former POW Sen. John McCain — have given currently serving transgender troops a temporary reprieve from President Donald Trump's ban, as well as hope for a longer-term guarantee that they can continue serving.

According to the Washington Post, Mattis instructed top military leaders Friday night to permit transgender service members to re-enlist until at least Feb. 21, 2018, when the Pentagon is expected to publish its decision on whether transgender people in the service will be allowed to remain in.

A Pentagon spokesman, Col. Rob Manning, confirmed the details of Mattis' memo to reporters. “Current transgender members will continue to serve throughout the military and continue to receive necessary medical treatment as prescribed by their medical provider,” he said. “Transgender services members whose term of service expires while the interim guidance is in effect may at the service member’s request, re-enlist under existing procedures.”

“When less than one percent of Americans are volunteering to join the military, we should welcome all those who are willing and able to serve our country,” McCain said in a statement released jointly with Republican Sen. Susan Collins of Maine and Democratic Sens. Jack Reed and Kirsten Gillibrand. “Any member of the military who meets the medical and readiness standards should be allowed to serve—including those who are transgender.”

While prospects for a congressional vote against Trump on the transgender ban are anything but certain — the Senate bill sponsors have already tried and failed to tack it onto the next defense budget bill — McCain's public stand made clear that if Mattis and his top brass found a way in their February 2018 review to permit transgender service, he'd get the Senate on board with the plan.

“The Senate Armed Services Committee will review the results of the DOD study on accession,” McCain added, “and will continue to work closely with our military leaders on any policy changes as we conduct oversight on this important issue.”