It was the biggest scam in Tricare’s history. Now troops may be going to jail

As of May 2019, the Justice Department has indicted and sentenced 74 people, with 50 more convicted and awaiting sentencing in the nationwide scheme perpetrated by at least 100 pharmacies. 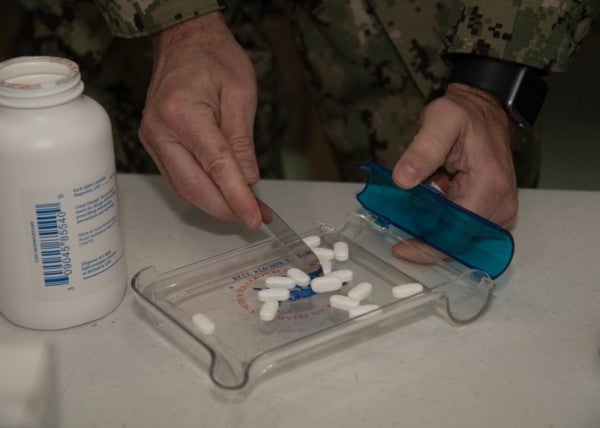 Editor's note: This article by Patricia Kime originally appeared on Military.com, a leading source of news for the military and veteran community.

For those who saw a loophole, it was easy money.

In 2013, a handful of pharmacy companies that make compounded medications — personalized dosages or formulas normally crafted for patients who can't tolerate certain ingredients — discovered they could make treatments such as pain and scar creams, wound ointments and erectile dysfunction drugs, and market them to patients enrolled in Tricare.

Then, they could bill the government a hefty sum, between $400 and $10,000 per prescription, making enough to cover the cost of beneficiaries' co-payments, provide kickbacks to participating physicians and middlemen, and generously pad their own pockets.

When the Defense Health Agency's losses caused by these specious prescriptions topped nearly $1.5 billion in the first half of 2015, the Pentagon moved to restrict its coverage of all compounded medications.

And the Justice Department began pursuing the unscrupulous pharmacists, doctors, marketers and salesmen involved, including military troops who saw the largest case of medical fraud in the Pentagon's history as a chance to make cash on the side.

As of May 2019, the Justice Department has indicted and sentenced 74 people, with 50 more convicted and awaiting sentencing in the nationwide scheme perpetrated by at least 100 pharmacies.

The criminals include at least five veterans, with more arrests of former service members possibly to come.

The most recent veteran to be convicted is former Marine Bradley White of Oakley, California, who pleaded guilty in July to conspiracy to commit health care fraud.

White worked with a team to recruit and pay Marines and dependents to accept medications compounded by the Cleveland, Tennessee, company Choice MD.

According to the Justice Department, the operation worked like this: Physicians who worked for Choice MD wrote prescriptions to Tricare beneficiaries, sending the prescriptions to pharmacies controlled by Choice MD. The pharmacists mailed the medications to the beneficiaries, billed Tricare, took a share of the reimbursement and distributed kickbacks to all involved.

Choice MD bilked Tricare out of $65 million; White was responsible for patients who billed Tricare more than $7.6 million, according to prosecutors. For his work, he received nearly $200,000 in kickbacks.

Another San Diego Marine, Josh Morgan, also pleaded guilty for his involvement in the same case.

In 2014, the Government Accountability Office recognized a growing problem with compound drug prescriptions at Tricare. The year before, the military health system paid $259 million for the prescriptions, an increase of more than $250 million over what it had paid a decade earlier.

The GAO recommended that Tricare bring its compound prescription benefit in line with its own regulations, and that stricter requirements be established at the Department of Veterans Affairs and Medicare.

With that warning, the race was on for corrupt pharmacies and physicians to take advantage of the liberal reimbursement policy while it was available. They launched aggressive marketing campaigns, cold-calling military family members and retirees, trolling Tricare beneficiaries on Craigslist, and setting up shop on or around military bases to sell medications.

Some military spouses touted the products at social gatherings. At Joint Base San Antonio, a drug marketer lured service members to a food truck set up outside the main gate, promising a free lunch to those who signed up for medications.

Pharmaceutical reps with access to military hospitals and resale stores solicited beneficiaries in the halls.

Army Staff Sgt. Cordera Hill was stationed at MacDill Air Force Base in Tampa, Florida, when he got involved in marketing compound medications made by LifeCare Pharmacy in St. Petersburg, Florida.

According to court documents, Hill was recruited by another service member stationed at MacDill to market compounded creams. Hill received his own prescriptions, marketed them to friends and signed on more representatives, including Anthonio Miller, a Navy petty officer, who subsequently recruited another service member, Rashad Barr, an information technology specialist in the Army Reserve.

The trio paid Tricare beneficiaries between $50 and $100 for ordering the creams; for their work, they received kickbacks. As a result of Hill's efforts, 21 patients, including himself, received prescriptions that cost Tricare $955,000, $813,600 of which was reimbursed to LifeCare.

Miller pleaded guilty to defrauding the government, while Barr's case was closed and he entered into a “pretrial diversion program,” according to court documents. He remains in the Army Reserve. Another service member involved, Nikkos Hamlett, an Air Force pharmacy technician, pleaded guilty to receiving kickbacks and received five years' probation.

Hill fought his charges, arguing that he had not broken any laws, was a victim of unethical employers, and wasn't aware that he had committed fraud.

He was found guilty of conspiracy and paying kickbacks to others and sentenced to 24 months in prison. On appeal, the 11th Circuit of the U.S. Court of Appeals affirmed his conviction but remanded his sentence to the original court. He was ordered to pay $43,000 in restitution — the amount of money he received for his role — and sentenced to time already served.

He is now a human resources specialist for a pharmacy chain in Tampa.

The Justice Department declined to comment on its work to prosecute service members involved in the fraud or discuss ongoing investigations.

According to the Defense Health Agency, the Pentagon has been awarded criminal restitution of $85.8 million and civil settlement amounts of $37.7 million to date. In total, more than $280 million has been restored to Tricare.

While work is ongoing, the Justice Department is in a race against the clock, with a five-year statute of limitations on prosecuting fraud against the federal government. Since much of the action occurred in early 2015, federal prosecutors, the Defense Criminal Investigative Service and partner law enforcement agencies have until May 2020 to charge any additional suspects.

While at work one day at DHA Headquarters in Falls Church, Virginia, Wheeler, a Tricare beneficiary, received a phone call notifying him that Tricare would pay for a pain cream that would help with achy joints.

He took notes and notified investigators in the building.

Wheeler said last year that Tricare has shut one door on fraud but continues to battle such activity.

“It's like the metaphor of the old hotel burglar,” he told Military Update last year. “There are still people going down the hall, rattling doors.”