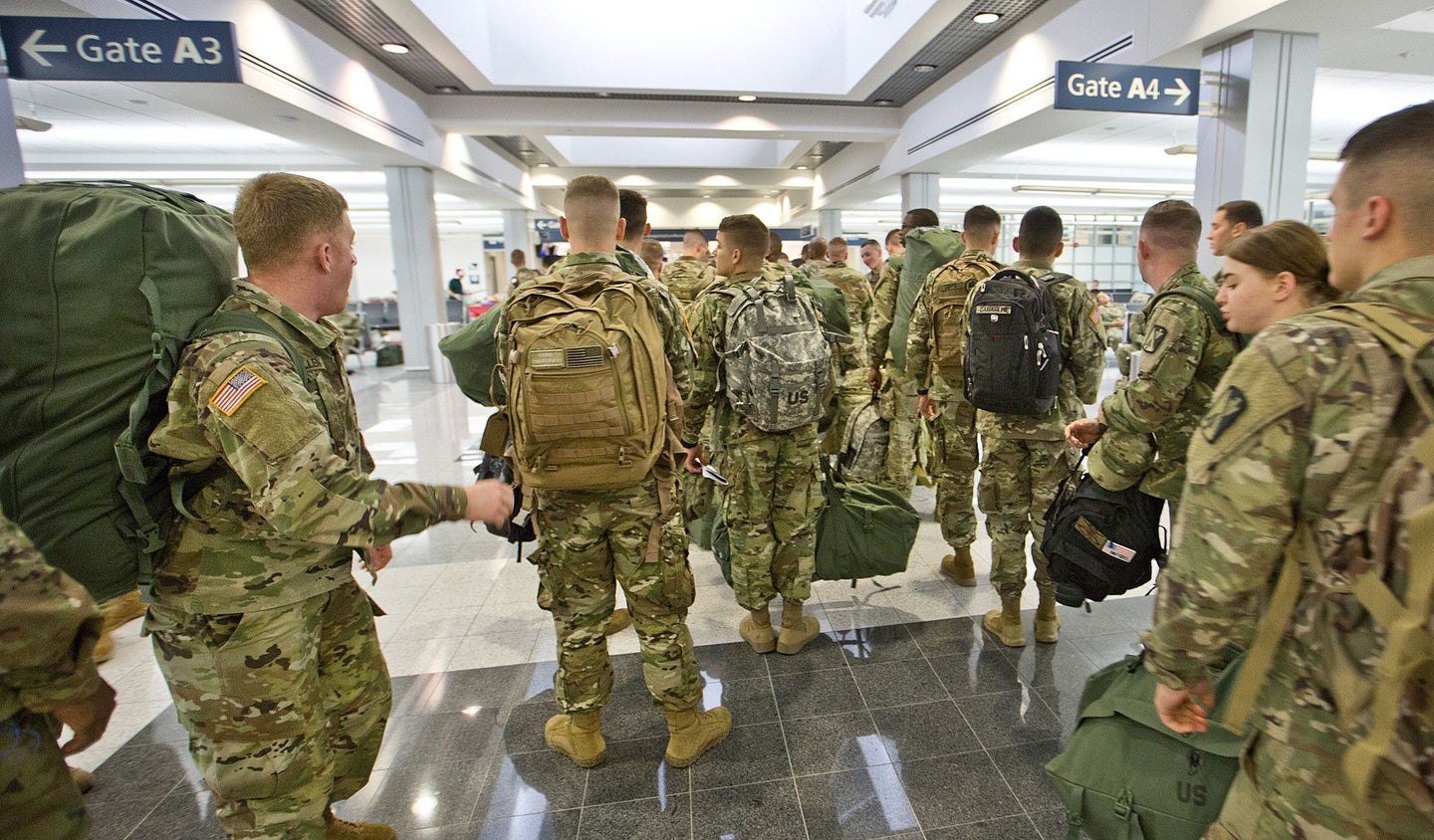 It’s a Peninsula tradition — several hundred soldiers camping out, sometimes for days, at the Newport News airport, waiting for flight home for the holidays — and it’s got people around the facility worried.

“I’m concerned there won’t be enough flights,” said Diane Fry, director of the USO office at Newport News/Williamsburg International Airport, as she pauses to talk about how volunteers traditionally pitch in with meals, treats, entertainment and visits for soldiers as they wait.

Mike Giardino, the airport’s executive director, is even blunter:

“We just don’t have enough seats,” he said.

Block leave at the holidays eases up the usual limitations on how many service members can be on leave at any one time — it’s a recognition that young people, some of whom are far from family and friends, really need the time off.

Giardino remembers that from his career — as well as some his own 20-plus-hour nonstop highway marathons back in the day.

And Giardino, the one-time commander of a 250-sailor aviation maintenance department at Naval Station Norfolk, remembering the holiday season lectures about safe driving that his senior chief used to insist on, worries that not enough flights means too many soldiers hitting the road for their own version of an overlong drive home.

For years, the airport has tried to help out by opening up its usually shuttered B concourse to host the soldiers and working closely with USO and community volunteers to make the wait for flights as painless as possible. Soldiers arrive in bus-loads — the first lot, often at 1 a.m., more than a week before Christmas. There’s a regular bus shuttle back to Fort Eustis as they return to Newport News after New Year’s Day.

But with 500 to 800 soldiers flying, some inevitably end up waiting — “then there’s always the ones who were sleeping when their flight was announced and we have to find another for them,” the USO’s Fry said.

“We’ll bring in Santa, people will come with candy — I’ve seen soldiers lining up at , just like kids, when they come around,” said Fry.

She and Giardino think social distancing in the terminal, and the airlines’ firm rules about masks and in-flight ventilation make flying a safer alternative to driving.

But the pandemic has hammered airlines, and at the Newport News airport that’s translated to a drop in service — from the seven daily flights American Airlines used to fly to Charlotte, and three to Philadelphia, the carrier is now averaging a bit more than three daily flights to the North Carolina airport. Delta, which had offered three daily flights to Atlanta, but stopped flying that route in the spring.

The airport isn’t. Major belt-tightening as it cleaned house after the previous board and management secretly spent $5 million of public funds to try to get the short-lived launched means the airport currently has little debt. Its annual interest cost is $292,000, nothing like the millions of dollars a year in interest other airports pay.

Giardino is hoping the airport’s board of commissioners will agree with him that offering airlines a temporary break on terminal rents and landing fees — he calls it a kind of thank-you gesture — might help get some more flights.

He’s thinking of that as a way to remind American and Delta and that there’s a lot of business to be done in Newport News.

It’s not just the block leave either — in fact, unlike some airports, Newport News normally has relatively steady traffic because some 70 percent of people flying to and from the Peninsula are business travelers. That’s a high proportion. And most are connected with the military or with the defense contractors who serve the military, and the travel they do isn’t ordinarily for the sort of mission that a video conference call can manage.

That, along with the airport’s relatively low fees and the financial muscle to offer incentives, was part of the pitch that the airport’s marketing director, was making last week at the TakeOff North America air service forum in Denver.

At the forum’s traditional “speed dating” session — when airports make the rounds of airlines to try to sell themselves, Spratley also pointed out that the expansion of the Hampton Roads Bridge Tunnel and Interstate 64 is going to make it even more difficult for Peninsula travelers to get to other airports.

It’s been a familiar line at recent air service forums — but this time, unlike in recent years, she got more than the usual “that’s nice.”

Four of the seven airlines she pitched asked her to come back with more information.

And, she added, the kind of rent and fee waiver Giardino is mulling may not cost much, but “is exactly the kind of gesture airlines remember.”