The U.S. military is searching for answers into the circumstances surrounding the deaths of four U.S. soldiers killed two weeks... 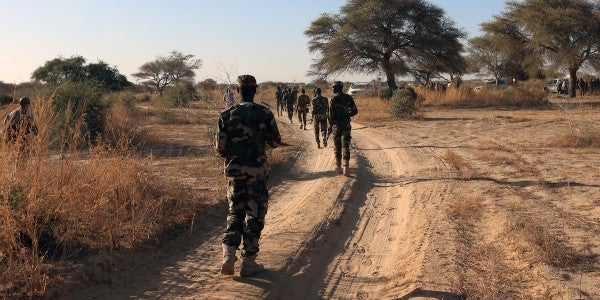 The U.S. military is searching for answers into the circumstances surrounding the deaths of four U.S. soldiers killed two weeks ago in an ambush in Niger as Defense Secretary Jim Mattis conceded Thursday that little about the attack is known, including how one soldier became separated from the rest of his unit.

“I will just tell you in this specific case, contact was considered unlikely,” Mattis said at the Pentagon as he sought to quell speculation that Army Sgt. La David Johnson, who was found dead after a nearly 48-hour search, was left behind by his fellow soldiers.

“The U.S. military does not leave its troops behind,” Mattis said, but offered no details about how Johnson was separated from the rest of the joint patrol with Nigerien troops who eventually found his body.

Marine Lt. Gen. Kenneth McKenzie, the director of the Joint Staff, told reporters later Thursday at the Pentagon that he would not share new details uncovered about the Oct. 4 attack publicly. He said he did not want to provide enemy forces information that they might find valuable.

But McKenzie did describe the attack as a sudden, chaotic fight “out in the middle of nowhere” that led to confusion on the ground. Once the fighting ceased, additional resources were brought in to aid search and recovery operations, he said.

Either American, Nigerien or French troops remained at the site of the ambush throughout the entire time when Johnson was missing, McKenzie said.

“A lot of men and a lot of women searched very hard to find him,” he said. “It took us a little while. We didn’t leave him behind, and we searched until we found him and we brought him home.”

Two weeks ago, the 40-person patrol was on a mission to meet with local leaders to discuss regional stability when they came under attack by militants in southwest Niger near its border with Mali. The Pentagon has described the attackers as likely a local, self-radicalized group aligned with Islamic State.

A firefight ensued, resulting in the deaths of Army Staff Sgts. Bryan C. Black, Jeremiah W. Johnson and Dustin M. Wright, who like La David Johnson, were assigned to the 3rd Special Forces Group at Fort Bragg in North Carolina.

French forces operating in the region launched a rescue operation, which included armed fighters and a medical evacuation unit that carried out the wounded, Mattis said. The U.S. soldiers who were killed were lifted out by contracted aircraft, he said.

Two American soldiers were wounded in the engagement. Their injuries were not considered life-threatening and they are recovering in the United States, said Dana White, a spokeswoman for the Pentagon.

Earlier this year, U.S. Africa Command raised a red flag about a lack of search and rescue assets and it often relied on contracted aircraft to carry out its missions. AFRICOM’s concerns were submitted to Congress as part of the command’s annual “posture” statement.

Questions surrounding the incident have become increasingly political, with partisan wrangling over how President Donald Trump has handled the process of consoling family members. The Pentagon also is facing criticism for not providing more information about the circumstances of the attack.

Sen. John McCain, R-Ariz., on Thursday told reporters that he might subpoena Pentagon officials for information about the attack. McCain, chairman of the Senate Armed Services Committee, threatened to hold up the Trump administration’s nominee for Army secretary until he receives more information, the Washington Examiner reported.

But White pushed back on McCain’s claims the Defense Department has been less than transparent with Congress about the ambush. She said Pentagon officials quickly notified staff members of the Senate and House armed services committees after the attack in Niger.

“We have kept them up to date,” White said. “Of course, we will work with Sen. McCain and his staff to make sure we get everything that they need. It is very important to [Secretary Mattis] and he is personally dedicated to it.”

U.S. special operations forces have been operating in Niger for several years in an effort to back up local forces engaged in a fight against militant groups such as Boko Haram and al-Qaida in the Islamic Maghreb. However, U.S. personnel are not on a formal combat mission, but rather serving as advisers.

While the various militant groups have wreaked havoc on regional governments and killed scores of civilians, there has been little sign that the groups have the capacity to carry out attacks in the West.

The fundamental question for the United States when it sends troops into hostile territory is whether it advances U.S. security interests, Mattis said.

“Anytime we commit our troops anywhere, it is based on answering a simple first question– is the well-being of the American people sufficiently enhanced by putting our troops there. That we put our troops in a position to die,” he said.