Troops still have a chance in December to receive their highest pay raise in years, even if Congress goes ahead... 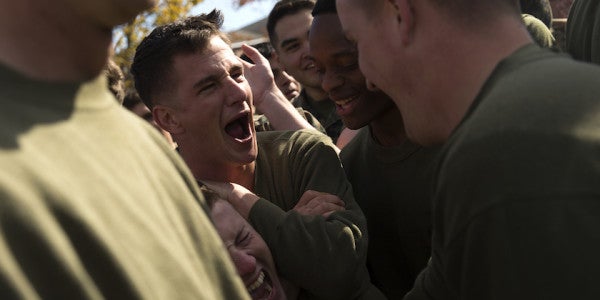 Troops still have a chance in December to receive their highest pay raise in years, even if Congress goes ahead with plans to put off a vote on 2017 defense spending for months to accommodate President-elect Donald Trump.

The House and Senate are hashing out the details of the National Defense Authorization Act, a sprawling military policy bill, and could wrap up this week. House lawmakers have proposed a version of the annual bill that includes a 2.1-percent pay hike instead of the 1.6 percent increase ordered by President Barack Obama to take effect in January.

If the House proposal prevails in the final NDAA – the Senate went with the lower raise – it could become law in December and the Defense Department would be required to begin doling out the biggest military pay raise in five years, according to congressional staff involved with the legislation.

Obama used an executive order to set the 2016 pay raise at 1.3 percent.

Congress has already abandoned plans to pass a 2017 defense appropriations bill before the end of the year, which could leave other new policies in the NDAA unfunded for now. But the pay raise could go into effect even as other spending increases are delayed, staff members said.

Republican leaders announced this month they will pursue a stop-gap budget measure to maintain current federal and military funding levels through the end of March so Trump can have input after being sworn in Jan. 20 as president. The Defense Department has repeatedly warned against such moves, contending it will cause a budgetary complication and thwart good planning.

But it remains uncertain how the closed-door NDAA negotiations will pan out in the coming days.

The armed services committees in the House and Senate are wrangling over whether to risk Obama’s veto of the NDAA by boosting base spending with $18 billion to buy new hardware such as ships and aircraft, increase troops and boost pay that has been lagging behind the private sector for years.

Military pay raises have been kept below 2 percent since 2011 while troops and families have been stressed by deployments, aging equipment and shrinking overall defense spending.

The National Military Family Association has said troops are being “nickel-and-dimed” and that a higher pay raise is among its top priorities.

Rep. Mac Thornberry, R-Texas, chairman of the House committee, has been leading the charge for higher military spending – including the 2.1-percent raise — and warning of a readiness crisis due to a dip in spending since the height of the wars in Iraq and Afghanistan. His Senate counterpart, John McCain, R-Ariz., advocated for a spending boost as well but ended up sponsoring an NDAA that hewed to the lower spending levels requested by the Obama administration.

Some budget analysts believe Thornberry and McCain might feel emboldened to push for bigger boosts to the military in the final NDAA following the election of Trump. Congress must still approve any final version of the bill.

Democrats have demanded increases for the military be matched dollar for dollar by more domestic spending but now might be more willing to cut a deal as they face a Republican president and Republican-controlled Congress next year.