Troops Assigned To The US Border Mission Are Bored As Hell

Editor's Note: This article originally appeared on Business Insider. The American military's support mission along the US-Mexico border has sparked... 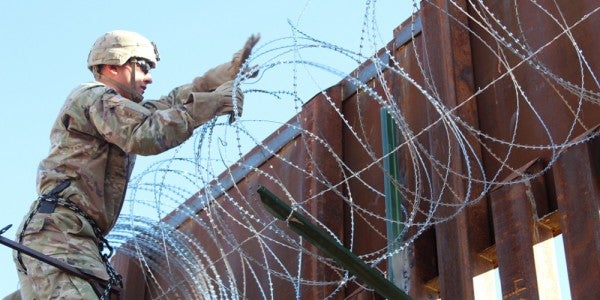 The American military's support mission along the US-Mexico border has sparked a lot of debate, with critics questioning aspects of the mission's legality, necessity, and short- and long-term implications.

The Department of Defense has yet to disclose an overall cost estimate of the deployment, which is expected to involve over 7,000 active-duty troops from across the US.

With the main migrant caravan still hundreds of miles from the closest point on the border, it remains unclear just how long troops will be deployed there.

The New York Times reported they may have to wait until at least Thanksgiving to return home, and while the deployed troops were careful not to discuss politics with reporters, the prospect of spending another holiday away from home for the mundane missions along the border could dampen spirits.

According to The Times, that is not the only issue with troop morale.

There is no dining facility on base, and showers were installed shortly before the report's publication on Saturday. Electricity is scarce, according to The Times, and is used only to power “lights and communication gear” — making it harder for soldiers to charge their cellphones and personal electronics.

Soldiers' tents are not fitted with electricity or air-conditioning, despite reports of heat exhaustion.

The Times likened the atmosphere to the early years in Afghanistan. Rep. Anthony G. Brown, a Maryland Democrat and Iraq War veteran, said a key difference is that in Afghanistan the soldiers have a mission.

Brown said that even on holidays, that mission, a sense of purpose, helped troops maintain morale. Along the border, it seems, that purpose is missing.

While some of the troops spend their days constructing barbed-wire fences, others are just trying to make their bases livable, according to The Times. Many are performing the same tasks as previously deployed National Guard units.

“When you send a soldier on a dubious mission, with no military value, over Thanksgiving, it doesn't help morale at all,” Brown told The Times.

Mark T. Esper, the US Secretary of the Army, has defended the deployments, saying that border support is not a waste of time or military resources.

“We all recognize that one of the many missions of the military is defense of the homeland and security of our borders,” he told The Times.

Outside the fences, the “invasion” President Donald Trump sent them to defend against — the caravan of migrant families fleeing from violence — inches forward, still some hundreds of miles in the distance.