Here Are Some Of The Badass Aircraft, Vehicles, And Munitions On Trump’s Massive Military Wish List 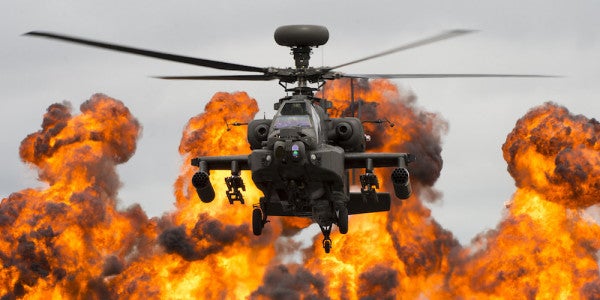 While Trump has pushed for a larger military since he was campaigning for president, Defense Secretary Jim Mattis has said more recently that the “real growth” in the military buildup begins with the now-unveiled fiscal 2019 budget.

With this massive amount, the military is setting up contracts that will help the U.S. fight the next war against near peer threats. This includes vehicles, aircraft, ships, and hundreds of thousands of munitions, much of which was used up in the fight against ISIS.

Here are a couple purchases that stand out.

The military seems set on rolling out the new fifth-generation stealth jet. The fighter has recently gotten some good news for future international sales, as tensions in Asia and the Middle East rise.

The B-21 Raider is a long-range stealth bomber that is intended to replace the B-1 Lancer and B-2 Spirit. Details of the B-21 are scarce, as even Congress doesn't know much about it.

$2.3 billion will be spent on further development of the aircraft, which is expected to be an important part of the future nuclear triad.

Aerial refueling plays a massive role in operations against ISIS and the Taliban. The KC-46 Pegasus can carry 212,299 pounds of fuel and has a maximum transfer load of 207,672 pounds. It is intended to replace the KC-135 Stratotanker.

The price tag for 15 new tankers is $3 billion.

The MQ-1 Predator will be retired as soon as March and the Air Force is expected to purchase more MQ-9 Reapers.

The Reapers can fly longer, faster, and carry everything from Hellfire missiles to Joint Direct Attack Munitions.

The AH-1Z Viper is a replacement/modernization of the Marine Corps' AH-1 Cobra.

The Corps plans to buy two more Vipers this year than last year and wants to have 342 in total.

Known as the Guardian, the AH-64E is another improved version of the AH-64 Apache. Additional new avionics and technology allow the gunship to fly faster, operate easier, and even control UAVs.

The AH-64Es are part of a $4.9 billion request from the Army for its aircraft.

President Donald Trump walks to board Marine One on the South Lawn of the White House, Thursday, Feb. 1, 2018, in Washington.

Sikorsky's S-92 has been selected to replace the Sikorsky VH-3D Sea King as the president's official helicopter. Initial fielding is planned for 2020, and the helicopters will have the iconic white and green paint scheme that is unique to presidential helicopters.

The price for the six new helicopters is expected to be $900 million.

Five variants of Joint Light Tactical Vehicles made by Oshkosh

The Department of Defense wants to fully replace the Humvee, which has been the workhorse of the US military since the mid-1980s. DoD has selected Oshkosh's L-ATV line as the primary vehicle for its Joint Light Tactical Vehicle program.

The Pentagon has allocated $2 billion for the purchases.

JDAMs are unguided “dumb” bombs that have gotten equipment that turn them into “smart” bombs, meaning they can be guided to their targets. The war against ISIS has caused a bomb shortage, so it should come as no surprise that the military is ordering so many new ones.

Hellfire missiles have proven to be absolutely essential for precision strikes against terrorists from Iraq and Afghanistan, to Syria and Somalia. They are anti-tank missiles that can be loaded on helicopter gunships like the AH-64 Apache, or drones like the MQ-9 Reaper.

Despite the fact that precision-guided strikes have become the dominant method of destroying enemy targets, good old-fashioned artillery is still a vital part. In fact, Marines in Syria recently set a new record for artillery barrages that have been intact since the Vietnam War.