KABUL, Afghanistan — If President Donald Trump withdraws up to half of the 14,000 U.S. troops fighting in Afghanistan, it... 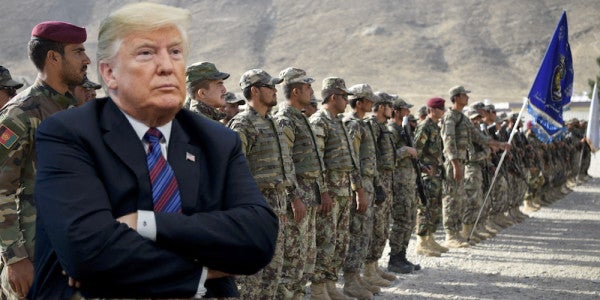 KABUL, Afghanistan — If President Donald Trump withdraws up to half of the 14,000 U.S. troops fighting in Afghanistan, it would undermine a nascent U.S.-backed peace process and the confidence of a Kabul government that American taxpayers have spent more than $2 billion to support, Afghans said Friday.

Many Afghans said reports that U.S. officials were developing plans to pull the troops out by summer — a sharp U-turn after Trump pumped more troops into combat duty in Afghanistan last year — would deliver a boost to the Taliban insurgency.

The news came hours after Trump’s point man for the peace process, Zalmay Khalilzad, visited Kabul and said the U.S. was prepared to continue to fight to ensure Afghanistan didn’t again become a haven for al-Qaida and other extremists who were once sheltered by a Taliban government.

“If we achieve that through peace, then we will continue, but if the Taliban are not prepared for that and war continues, then we will stand by the Afghan government and people,” Khalilzad said, according to a transcript of an interview with the Tolo news network.

Khalilzad had concluded more than two weeks of meetings with officials in eight countries — including representatives of the Taliban — to build support for peace talks between the Taliban and the Kabul government.

Khalilzad said Taliban officials had told him “we cannot defeat you” militarily and that Middle Eastern partners who are believed to have leverage with the Taliban and the Kabul government — including Saudi Arabia and the United Arab Emirates — had proposed a three-month cease-fire as a starting point for negotiations.

The Taliban did not respond to requests for comment.

It was not immediately clear how halving the U.S. troop presence would affect the Pentagon’s ability to wage a war now in its 18th year. Some analysts said the decision would bolster the Taliban’s long-held view that the U.S. would eventually give up on its military intervention in Afghanistan.

The Trump administration is “giving the Taliban victories, and the talks have not even begun,” tweeted Ahmad Shuja, an Afghan political analyst and editor of the Georgetown Public Policy Review.

The U.S. military has increased airstrikes and put more of its troops in harm’s way this year to shore up the struggling Afghan security forces, which have been leading the war effort since 2015.

The effort has not been extremely successful. The Taliban has steadily gained ground, controlling large chunks of the Afghan countryside and threatening to overrun major provincial capitals as the Afghan military and police suffer increasing casualties and attrition.

Many Afghans greeted the reports of a U.S. drawdown with dismay.

“The exit of (foreign) troops is to happen ultimately but should be carried out through a strategic process that allows the Afghan government to prepare to fill the gap.”

Salehi said young Afghans were “concerned about losing the foundation built over two decades” since the 2001 U.S.-led invasion toppled the Taliban government.

The Afghan government issued a terse statement saying it was prepared to ensure the security of its country.

Afghan officials have already expressed their displeasure with Trump’s push for peace talks because Taliban representatives have refused to meet with envoys from the Kabul government, insisting they first want the U.S. to agree to pull out all foreign troops from Afghanistan.

President Ashraf Ghani’s government has insisted that any peace process be Afghan-led, and some of his aides have reportedly felt betrayed by Trump’s apparent haste to bring U.S. involvement in the war to an end.

In the interview Thursday, Khalilzad acknowledged that Trump was eager to end the war, having promised to do so during the 2016 presidential campaign.

“But it should not be misinterpreted,” Khalilzad said. “We want peace here with respect to set objectives — that Afghanistan will not be a threat for the U.S. — and that we have a positive relationship with Afghanistan.”

Intizar Khadim, a political analyst in Kabul, said he did not believe Trump would push to withdraw all U.S. troops, a decision that would likely face pushback from congressional hawks.

“I am sure President Trump will not be able to convince hard-core Republicans … to put an absolute end to the Afghan military mission,” Khadim said. “He will cut the troop numbers for two reasons — to heed the Taliban demand on a U.S. exit for a peace deal and to fulfill his campaign promise.”

Furhan Khalil, a 28-year-old linguist and photographer, said the U.S. drawdown “will affect the morale of our security forces and on the other hand improve the morale of the Taliban.”

“I believe there will be more crime and suicide attacks.”