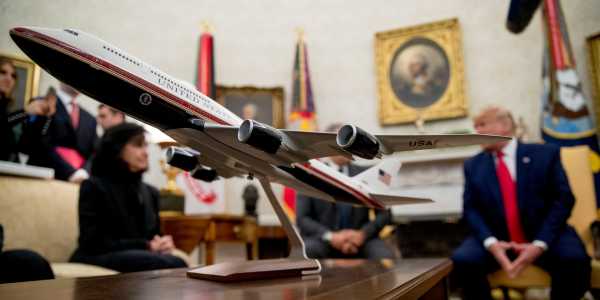 The program is actually a bit more expensive, as Defense One learned last year.

“The total VC-25B acquisition cost … is $5.3B and encompasses all costs associated with fielding the system,” an Air Force spokeswoman told the outlet. “The additional costs beyond the $3.90B are for standard work outside of the Boeing contract scope for two aircraft.”

As The War Zone notes, military technical documentation is costly. For example, a new structural repair manuals for the P-8A Poseidon Multi-mission Maritime Aircraft set the Navy back more than $30 million.

The Air Force announced last month that the modification of two Boeing 747-8 aircraft for the VC-25B program is already underway at a Boeing facility in San Antonio, Texas. The service revealed that the future Air Force One, as compared to the commercial variants, will feature “electrical power upgrades, a mission communication system, a medical facility, executive interior, and autonomous ground operations capabilities.”

According to the Department of Defense, it will “provide the President, staff, and guests with safe and reliable air transportation at the same level of security and communications capability available in the White House.”

The new planes are not expected to be put into service until at least 2024, and the instruction manuals are not required to be complete until 2025.