Every time Trump has attacked American veterans or military families 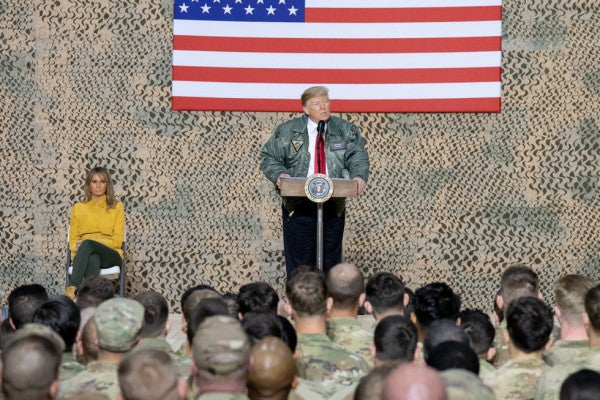 Serving in the military provides no protection from President Donald Trump's ire.

Trump has never served in any capacity. He received five military deferments — one for
bone spurs, and four for education — during the Vietnam War.

In the last few years, he's also started calling veterans who have been critical of him “
Never Trumpers,” which he has said are “human scum.”

Here are 16 veterans or military families that Trump has disparaged.

In July 2015, at a forum in Iowa, then-presidential candidate Trump said Sen. John McCain, who retired from the Navy as a captain, awarded a Silver Star and a Distinguished Flying Cross, was only a war hero because he had been taken hostage. “He was a war hero because he was captured. I like people that weren't captured,” Trump said.

When McCain died in 2018, Trump refused to lower the White House flag back to half-staff, even though it's become customary for presidents to sign a proclamation calling for the flag to remain at half-staff for members of congress until the day of interment, Business Insider's John Haltiwanger reported.

Trump continued his attacks criticizing him again in March 2019, for the role he played in the investigations into whether Russia influenced the 2016 election. “Spreading the fake and totally discredited Dossier 'is unfortunately a very dark stain against John McCain,'” he tweeted, referring to McCain's decision in December 2016 to turn the dossier containing salacious (and largely uncorroborated) intel about Trump over to the FBI.

In February 2016, Trump turned his ire onto Sen. Lindsey Graham, who served in the US Air Force and rose to the rank of Colonel, calling him a disgrace. He also said Graham was one of the “dumbest human beings” he'd ever seen, and that he was a “nut job.”

Trump was lashing out at Graham after the South Carolina senator had questioned Trump's ability to be president. Graham had also endorsed Florida Gov. Jeb Bush.

Since Trump took office, he and Graham have buried any mutual dislike and become close allies.

In July 2016, Trump took aim at retired four-star General John Allen. “You know who he is? He's a failed general. He was the general fighting ISIS. I would say he hasn't done so well, right?” Trump said, according to Politico.

Trump wasn't a fan of Allen's, since he supported his 2016 opponent Hillary Clinton.

At the Democratic National Convention, Allen said, “I also know that with her as our commander in chief, our international relations will not be reduced to a business transaction.” He was alluding to what would happen if Trump was elected.

In July 2016, Trump attacked the family of Capt. Humayun Khan, a slain soldier, dismissing a speech his father Khizr Khan made, because he said Khan's mother hadn't been allowed to speak.

Trump was referring to Islam tradition of female subservience, but the family said she had not spoken because she was too emotional to talk about her son's death.

The elder Khan also said Trump had never sacrificed anything or lost anyone, to which Trump responded, “I think I've made a lot of sacrifices. I've worked very, very hard. I've created thousands and thousands of jobs.”

In August 2017, Trump called Sen. Richard Blumenthal “a phony Vietnam con artist.” He was referring to misleading statements Blumenthal had made saying he had served in Vietnam, when he'd served during Vietnam.

Blumenthal had apologized for the statements, but Trump also tweeted that “he cried like a baby and begged for forgiveness like a child,” which was baseless.

The New York Times reported in 2010 that Blumenthal had deferred his Vietnam enlistment five times before joining the Marine Reserve and mostly doing training and service projects in Washington.

In October 2017, Trump forgot the name of slain U.S. Army Sgt. La David Johnson, while he was on the phone with his widow. Johnson was killed in an ambush in Niger while in active service. Myeshia Johnson said the call with Trump made her cry, and that Trump told her that her husband “knew what he had signed up for.”

Trump disagreed with this and tweeted that he had known his name and spoke it from the beginning, without hesitation.

But Rep. Frederica Wilson of Florida said Johnson was telling the truth, and then-White House chief of staff John Kelly explained in a press conference what Trump had meant, effectively confirming what Johnson said.

In April 2018, Trump called James Clapper, the former director of national intelligence, “a lying machine.” Trump was referring to Clapper's testimony before the Senate Intelligence Committee in 2013, when he said the NSA did not wittingly collect data on Americans.

According to documents released from whistleblower Edward Snowden, the NSA had collected information about American citizens' calls and internet use.

Clapper is a retired Air Force Lieutenant General, who served twice in Southeast Asia. He has been a frequent critic of Trump.

In June 2018, Trump called Rep. Conor Lamb of Pennsylvania “Lamb the Sham,” when he endorsed Lamb's opponent for the district. He also criticized him for only voting with House Speaker Nancy Pelosi.

Lamb is a Marine Corps veteran. The reference to Lamb being a “sham” might stem from previous claims Trump made about Lamb only winning his election by supporting Trump's own policies, even though he is a Democrat.

In November 2018, Fox News' Chris Wallace asked Trump about his thoughts on retired Admiral William McRaven, a former Navy Seal who was behind the mission that killed Osama Bin Laden. He interrupted Wallace and said, “Hillary Clinton Fan.” When Wallace continued, Trump did, too. “Excuse me: Hillary. Clinton. Fan.”

Trump went on to repeat that McRaven supported Clinton — which he hadn't — as well as former President Barack Obama, and said, “Frankly, wouldn't it have been nice if we got Osama bin Laden a lot sooner than that?”

Trump's attacks on McRaven were in response to an opinion piece McRaven wrote for the Washington Post, telling him to revoke his security clearance, after Trump had revoked former CIA director John Brennan's clearance.

McRaven wrote, “I would consider it an honor if you would revoke my security clearance as well, so I can add my name to the list of men and women who have spoken up against your presidency.”

In October 2019, McRaven said the U.S. is “under attack from the president” after Trump pulled U.S. troops out of Syria, allowing Turkish-backed militants to wage assaults against the once U.S.-backed Kurdish militia.

In January 2019, Trump said retired four-star General Stanley McChrystal, who led U.S. forces in Afghanistan between 2009 and 2010, was fired by former President Barack Obama “like a dog.” He also said his final assignment was a total bust, that he was a Hillary Clinton lover, and he was known for his “big dumb mouth.”

Trump's attack was in response to McCrystal saying he wouldn't work for Trump's administration, because he didn't think Trump told the truth.

In May 2019, several days after the former special counsel Robert Mueller released his investigative report on Russian election interference and Trump's attempts to obstruct justice, Trump tweeted the report had been constructed by “Trump Haters,” and called Mueller “highly conflicted.”

Mueller fought in the Vietnam War, and was awarded multiple awards, including a Purple Heart and a Bronze Star. Trump disparaged him throughout the two-year investigation.

Also in May, Trump called up former Fox News anchor Bill O'Reilly and said Mueller disliked him because Trump refused to give back a $15,000 deposit for a membership at one of Trump's golf courses. Mueller disputed the account.

Trump also falsely accused Mueller of deleting emails and texts between FBI agents in June, when 19,000 texts were deleted due to a technical glitch.

In August 2019, Trump told Democratic Rep. Seth Moulton, who served as a Marine in Iraq, “You remain a frickin' coward” when Moulton dropped out of the race to be the next Democrat presidential candidate.

Moulton was awarded a Bronze Star and a Navy and Marine Corps Commendation medal, Business Insider's David Choi reported. The awards cited his fearlessness for when he exposed himself to fire to help four of his Marines who were wounded.

The comments were made during a meeting with lawmakers who were assessing what the U.S. should do about the Syria-Turkey conflict. Senate Minority Leader Chuck Schumer repeated what Mattis had previously said about needing to keep pressure on the area to stop ISIS from resurging, and it was then that Trump cut him off, and said Mattis was overrated. He also said he was better at the job than Mattis.

Mattis responded at a foundation dinner, a day after reports about Trump's comments came out, by saying, “I guess I'm the Meryl Streep of generals.” This was because Trump had also said Streep was one of the most overrated actresses in Hollywood.

In October 2019, John Kelly, Trump's former White House chief of staff, told a live audience that he'd told Trump not to hire a “yes man,” because if he did, he would get impeached. When Trump heard about it, he said, “John Kelly never said that, he never said anything like that. If he would have said that I would have thrown him out of the office. He just wants to come back into the action like everybody else does.”

Kelly is a retired Marine general who fought in the Persian Gulf War and the Iraq War, and spent more than 45 years in the service, according to Business Insider's Michelle Mark.

In October 2019, Trump called Bill Taylor, the U.S.'s chief envoy to Ukraine, who was a witness in Trump's impeachment inquiry, and who had given evidence against him, a “Never Trumper.” He went on to say, “Never Trumpers” were “human scum.”

Taylor had given “damning” testimony to Congress on October 22 that prompted “sighs and gasps” from people in the room, according to the Washington Post and Politico.

Taylor, a West Point graduate who earned the Bronze Star for valor in Vietnam, implicated Trump for directing the U.S. to withhold security assistance from Ukraine unless they caved to his demands for politically motivated investigations, Business Insider's Sonam Sheth reported.

In October 2019, Lt. Col. Alexander Vindman, a Purple Heart recipient, was the most recent former-soldier to face criticism from Trump. After Vindman's opening statement was released to the media, but before he'd given evidence at the impeachment inquiry, Trump called him a “Never Trumper.”

Vindman served in Iraq, where he was wounded by an IED, and received a Purple Heart.

Vindman told Congressional investigators he reported the call to the NSC's top lawyer.