If America finds itself at war, Bill Belichick could get an interesting phone call 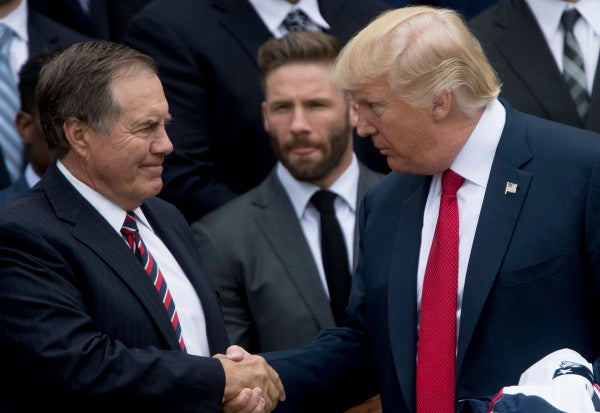 If America finds itself at war, Bill Belichick could get an interesting phone call.

Appearing on The Hugh Hewitt Show, President Donald Trump said that if faced with battle, he’d seek the Patriots coach’s counsel on warfare.

“You know, if I ever had a military battle, I’d call up Belichick and say what do you think? What do you think? Give me a couple of ideas,” Trump said. “And he’d be as good as any general out there.”

Belichick wrote Trump a congratulatory letter that the president read on the eve of his election in 2016, and Tom Brady had a “Make America Great Again” hat in his locker briefly. Which of the two does Trump believe has a better chance of winning a Super Bowl in 2020?

“Well, I would say this. You’ve got, if you ask me coach on coach, I like that as a better question,” Trump said. “You always have to hit me with these very tough questions. I think they’re both going to do great. They’re both friends of mine. I’ll tell you, Belichick is an incredible coach, and I think he’s going to do really well. This guy just knows how to win. And he’s a very good friend of mine. He’s a winner.

“And I think Tom, you know, Tom picked a team where they have a very good offensive line and supposedly great receivers, great receivers. And he did that on purpose. He didn’t pick a team just for the dollars. He picked a team that really supposedly has some real talent that hasn’t quite gotten there, and in a long time. So I think Tom’s going to be an interesting person to watch.”

However, Trump said he won’t be watching at all in players demonstrate during the national anthem.

“It’s going to be very interesting to watch. But I won’t watch — I won’t watch if people don’t stand for the national anthem,” Trump said. “If they kneel, I don’t watch, including the Super Bowl. With that being said, we’re helping the NFL greatly on getting going, etc., etc. But I won’t care and I won’t watch if they don’t stand for the national anthem, and that’s what’s happened to basketball. I don’t know if you’ve seen what’s going on with basketball.”