Trump threatens Bolton over book, claiming all his conversations are ‘classified’

Bolton resigned from the White House in September 2019 after clashing with Trump on a range of national security issues. 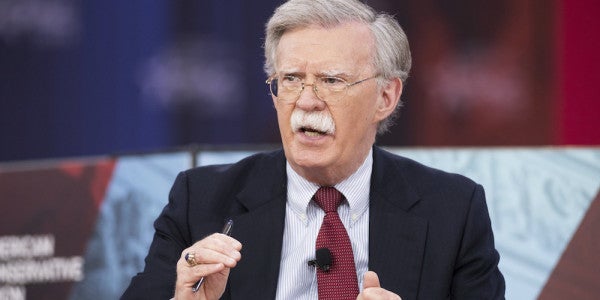 President Trump threatened Monday that John Bolton will face “very strong” criminal repercussions if he moves ahead with plans to publish an explosive tell-all book about his tenure as Trump’s national security adviser.

The president suggested his threat has teeth because “any conversation with me is classified” and Bolton’s book, “The Room Where It Happened,” promises to be filled with first-hand accounts of the inner workings of his administration.

“If the book gets out, he’s broken the law, and I would think that he would have criminal problems. I hope so,” Trump said during a roundtable event at the White House.

Charles Cooper, Bolton’s lawyer, did not return a request for comment.

Mark Zaid, a veteran national security attorney, disputed Trump’s claim that all his conversations are classified.

“It’s not true as a general rule,” Zaid told the Daily News.

However, Bolton could be in serious trouble if there is in fact classified information in the book, according to Zaid.

It’s ultimately up to the courts to determine whether Bolton’s tome contains classified information if he moves ahead with publishing it.

The likely bombshell is expected to hit shelves on June 23.

A press release from last week says it is filled with damning details about Trump, including accusations that his impeachable conduct extended far beyond his Ukraine scandal and permeated his entire foreign policy agenda.

But Attorney General William Barr all but confirmed reports during Monday’s roundtable event that the Justice Department will do Trump’s dirty work and sue to block the book’s release.

“People who come to work in the government and have access to sensitive information … they have to go through a clearance process before they can publish a book,” Barr said. “We don’t believe that Bolton went through that process, hasn’t completed the process and therefore is in violation of that agreement.”

Cooper contended in a Wall Street Journal op-ed last week that his client went through a four-month classification review with the White House and that Trump is at this point only seeking to stall.

Bolton resigned from the White House in September 2019 after clashing with Trump on a range of national security issues.

Most prominently, Bolton is said to have been infuriated by Trump’s bid to pressure Ukraine’s government last summer into launching investigations of Joe Biden and other Democrats while holding up $391 million in U.S. military aid as leverage — a scandal that resulted in the president’s impeachment.

Despite facing a subpoena, Bolton ultimately refused to testify in the House impeachment inquiry into Trump’s alleged misdeeds.