This pay wall is a hit. Brian Kolfage, an Air Force veteran who lost his legs and right arm during... 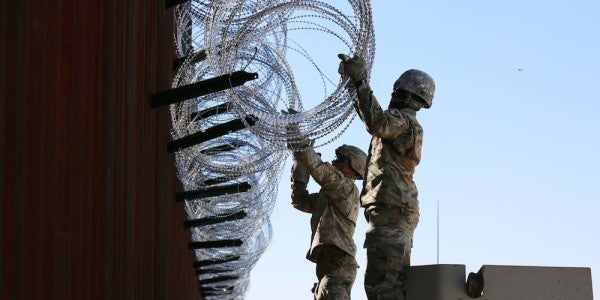 This pay wall is a hit.

Brian Kolfage, an Air Force veteran who lost his legs and right arm during his second deployment in Iraq in 2004, started a GoFundMe campaign to fund a border wall between the United States and Mexico – and has raised more than $1,000,000 in two days.

“I was just kind of fed up with the way things were going politically, the games people are playing,” Kolfage told the Daily News. “I knew that it would be big, (but) I didn’t expect it that fast.”

Kolfage, 37, set the goal for his “We the People Will Fund the Wall” campaign at $1 billion because GoFundMe caps donations at that amount. He hopes to raise $5 billion, which will then be given to the government to fund the wall.

The Miramar Beach, Fla., resident says he hasn’t spoken directly with the Trump administration yet, but he has had discussions with members of Congress on how to put his plan into action.

Kolfage cited the case of businessman David Rubenstein, a billionaire history buff who donated $7.5 million to the U.S. government in order to repair earthquake damage to the Washington Monument in 2012.

“This is the same thing, only a grander scale,” Kolfage said. “People want this and they want a way to give for something they’re passionate about. They just didn’t have a way to give because politicians weren’t giving them those avenues to contribute or to do something.”

The GoFundMe page’s description says Kolfage – whose mother’s side of the family immigrated from Mexico – feels “deeply invested” in securing the United States’ borders to ensure safety for future generations.

Building a massive border wall between the United States and Mexico has long been one of Trump’s most prominent campaign promises, but the plan – which could cost anywhere from $5 to $25 billion – has failed to gain congressional approval.

Trump has in recent weeks threatened to allow a government shutdown if the wall funding isn’t included in any budget deals, but a short-term spending bill announced by the Senate Wednesday did not include any money for the wall.

Nevertheless, Trump insisted again Wednesday on Twitter that the wall will be built “one way or another,” and reiterated his claim that Mexico will indirectly pay for it through a trade agreement between the U.S., Mexico and Canada.

“Mexico is paying (indirectly) for the Wall through the new USMCA, the replacement for NAFTA!” he wrote on Twitter. “Far more money coming to the U.S. because of the tremendous dangers at the Border, including large-scale criminal and drug inflow, the United States Military will build the Wall!”

For Kolfage, the means of getting the wall up – and Trump’s involvement in the plan – makes no difference.

“I don’t want to weigh in on any political aspects of this wall. I want to keep the focus on funding this wall,” he said. “I don’t really care what Trump has to say about it and what other politicians are saying about it. We just want to fund it, and that’s it… Whatever he’s doing to get the wall, that’s his own deal.”

Kolfage’s campaign claims that should it fall short of its goal, “every single penny” will be refunded to those who donated.