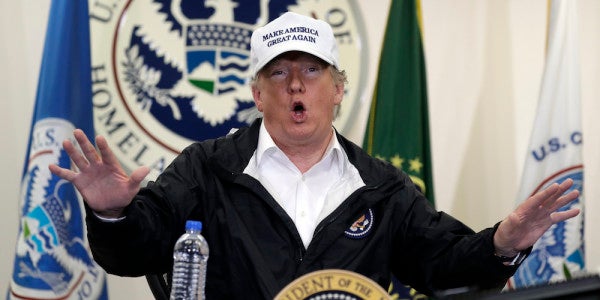 WASHINGTON — President Donald Trump moved closer Thursday to declaring a national emergency in an effort to secure funds for a border wall and resolve a government shutdown now into its 20th day.

“I have the absolute right to declare a national emergency,” Trump said to reporters before departing the White House for McAllen, Texas, where he was scheduled to tour Border Patrol facilities and meet with agents along the U.S.-Mexico border.

“If this doesn't work, probably I will do it,” he continued. “I would almost say definitely. This is a national emergency.”

Insisting that he would prefer Congress approve money for the wall, Trump left himself some wiggle room, but clearly signaled that an emergency declaration is becoming more likely.

“If we don't make a deal — I mean, I would say 100 percent,” the president said, responding to a question about its likelihood. “But I don't want to say 100 percent because maybe something else comes up. But if we don't make a deal, I would say it would be very surprising to me that I would not declare a national emergency and just fund it through the various mechanisms.”

Trump also addressed the discrepancy between his famous, often-repeated campaign promise that Mexico would pay for a border wall and the current reality of fighting Congress to secure U.S. dollars to build a steel barrier.

“When — during the campaign, I would say, 'Mexico is going to pay for it' — obviously, I never said this and I never meant they're going to write out a check,” the president said.

In fact, Trump did specifically say that Mexico would make direct payments, threatening at one point to halt remittances that Mexican American workers send to relatives in Mexico to force Mexico to “make a one-time payment of $5 (billion) to $10 billion.”

Trump repeated his more recent claim that Mexico will indirectly pay for the wall through a new North American trade agreement. That agreement has yet to win legislative approval in the U.S., Mexico or Canada and has no provision in it that would involve Mexico's reimbursing the U.S. for the costs of a wall.

Trump's comments and the visit to the border came a day after a meeting with congressional leaders ended abruptly with the president walking out of the room after Democrats told him they did not plan on approving more money to fund a physical barrier along the southern border.

“I didn't pound the table. I didn't raise my voice. That was a lie,” Trump said Thursday, describing the acrimonious end to the meeting the day before. “I very calmly said, 'If you're not going to give us strong borders, bye-bye,'” he told reporters. “I didn't rant like you reported.”

Although Democrats have approved $1.3 billion for border security in the current fiscal year, the president has been unable to persuade them to go further and vote for the $5.7 billion in wall funds that he has asked for.

With the stalemate pushing the partial government shutdown close to a fourth week, the option of declaring a national emergency has become more attractive to Trump. Although an emergency declaration would face legal challenges, it would provide him a way to reopen the government without appearing to cave in on his demand for a wall.

Trump has received conflicting advice about declaring an emergency from administration aides and friends outside of Washington. Some view it as an effective way out of the prolonged stalemate that would still show the president's supporters that he continues to fight to achieve his signature campaign promise. Others, however, have expressed concerns.

Rep. Mac Thornberry of Texas, the ranking Republican on the House Armed Services Committee who has fought to boost defense spending, said this week that he opposed using money from the Pentagon's budget to pay for a wall.

And other conservatives have cautioned the White House that declaring a national emergency to bypass a stubborn Congress would set a dangerous precedent, one that could backfire on Republicans in the future should Democrats retake the presidency and attempt to fund other initiatives without approval from lawmakers.

During the freewheeling exchange with reporters on the South Lawn on Thursday morning, Trump said that House Speaker Nancy Pelosi, D-Calif., and Senate Minority Leader Charles E. Schumer, D-N.Y., were more difficult to negotiate with than the Chinese.

He also reprised his blanket denunciations of Democrats from the campaign trail.

Trump did, however, leave the door open to a legislative compromise. Senior White House aides and GOP senators have had conversations in recent days about some sort of funding package that might include the additional wall funding the president wants as well as something to entice Democrats to accept it.

But the president would not accept the premise that responsibility for resolving the shutdown is his alone.

“The buck stops with everybody,” he said.

WATCH NEXT: What A Border Deployment Is Really Like