A federal appeals court struck a blow Friday against President Donald Trump’s signature domestic achievement, ruling that he acted unlawfully by shifting Defense Department funds to pay for his much touted wall along the U.S.-Mexico border 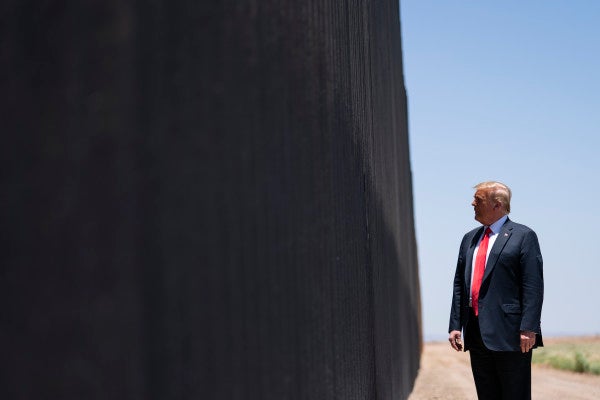 WASHINGTON — A federal appeals court struck a blow Friday against President Donald Trump’s signature domestic achievement, ruling that he acted unlawfully by shifting Defense Department funds to pay for his much touted wall along the U.S.-Mexico border.

The 2-1 ruling from the California-based 9th Circuit Court of Appeals could slow construction, days after Trump toured a segment in Yuma, Ariz., to mark completion of more than 200 miles of new barrier.

He has promised to finish 500 miles by the end of the year, but financing has been a challenge from the outset.

Congress has adamantly refused to provide as much as the White House has sought. And even fellow Republicans questioned his authority to shift funds from the military construction budget.

In February, for instance, Clarendon Rep. Mac Thornberry, the top Republican on the House Armed Services Committee, criticized his plan to divert $3.8 billion from the Pentagon budget, calling that “contrary to Congress’ constitutional authority.”

“I believe that it requires Congress to take action,” he said, adding that the Trump administration’s move “undermines the principle of civilian control of the military and is in violation of the separation of powers within the Constitution.”

The 9th Circuit echoed that view in its ruling, which the administration is expected to appeal to the U.S. Supreme Court.

Thornberry’s pushback bolstered a deluge of criticism coming from Democrats, who fumed that the siphoning for the wall would take away funds that were slated for fighter jets like the F-35, Navy ships and National Guard equipment.

The diversion comes after the Trump administration already reallocated more than $6 billion from military accounts, largely related to construction projects, and other areas to help pay for the barrier.

Fort Worth Rep. Marc Veasey, a Democrat whose district has close ties to the defense industry, said in a news release that Trump’s decision was “completely unacceptable” and would “jeopardize our national security and put American jobs at risk.”

“The administration must stop these reckless decisions without proper consultation with Congress to fund their bigoted and archaic border wall that both hurts our national security and makes Americans less safe,” he said.

Trump’s border wall has been a lightning rod ever since he made it an essential part of his campaign platform. While the president long pledged that Mexico would pay for the “big, beautiful wall,” American taxpayers have instead been left to foot the bill.

The Defense Department has started taking the brunt of the costs.

Congress has given Trump far less for the border barrier than he’s requested, particularly since Democrats took over the House. So the administration has looked to the Pentagon and elsewhere to make sure that progress continues on revamping and expanding fencing along the border.

The barrier continues to have strong support among Republicans in Texas and beyond.

Terrell Rep. Lance Gooden, a freshman Republican, took to social media on Thursday to celebrate the news of the border wall reallocation by tweeting out the hash tag #MAGA, which represents Trump’s slogan of “Make America Great Again.”

Even Thornberry took pains to point out his view that the “wall should be funded.”

“But the funding must come through the Department of Homeland Security rather than diverting critical military resources that are needed and in law,” he said, while stressing that the situation at the border “represents a national security challenge for our country.”

Trump, who wants hundreds of miles of wall done by year’s end, told Congress on Thursday that the “ongoing border security and humanitarian crisis at the southern border of the United States continues to threaten our national security, including the security of the American people.”

But support for the wall is not universal.

A Dallas Morning News/University of Texas at Tyler poll conducted last month found that while 50% of registered Texas voters strongly agree or agree that a border wall is necessary for a safe U.S.-Mexico border, 36% strongly disagree or disagree with that notion.

Rep. Sylvia Garcia, D-Houston, was among the lawmakers on Thursday who blasted the president’s diversion plan.

“The Trump administration continues to illegally redirect funds that have been appropriated by Congress to pay for Trump’s racist vanity project,” she wrote on Twitter. “I won’t stop fighting this racist wall that has been used to target and harm immigrant communities.”

The continued reliance on the Defense Department also carries risk, particularly in Texas and other states that play a significant role in the defense sector. Lockheed Martin, for instance, is building the state-of-the-art F-35 fighter in Fort Worth.

But Fort Worth Rep. Kay Granger, the top Republican on the House Appropriations Committee, said she had “confidence that the platforms manufactured by the world-class workforce in and around Texas District 12 will be preserved and jobs will be protected.”

Granger has become a close Trump ally amid a tough GOP primary campaign. She blamed Democrats for forcing Trump to redirect funds to “secure the southern border.”

“The president has come up with a reasonable approach that will provide the funding necessary to address the border crisis without jeopardizing our national security,” she said, adding that she “unequivocally” supports Trump’s efforts.