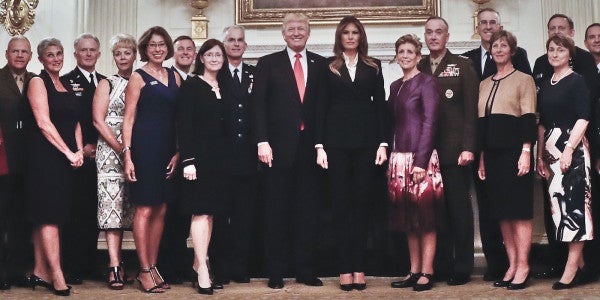 President Donald Trump offered cryptic remarks Thursday night while posing for photos with military leaders, saying the gathering might represent “the calm before the storm.”

He made the comments among senior military leaders and their spouses in the White House State Dining Room ahead of a dinner expected to include the discussion of a range of national security issues.

“You guys know what this represents?” Trump asked assembled members of the media. “Maybe it’s the calm before the storm.”

Asked repeatedly by reporters to clarify his comments, Trump said, “You’ll find out.”

During a meeting with military leaders earlier in the afternoon, Trump said his administration was focused on “challenges that we really should have taken care of a long time ago, like North Korea, Iran, Afghanistan, ISIS and the revisionist powers that threaten our interests all around the world.”

During those remarks, the president also appeared to issue a vague threat toward the regime in North Korea, which has antagonized the U.S. president with a series of nuclear and ballistic-missile tests.

“We cannot allow this dictatorship to threaten our nation or our allies with unimaginable loss of life,” Trump said. “We will do what we must do to prevent that from happening. And it will be done, if necessary — believe me.”

Trump also is expected to soon announce his decision on whether to “decertify” the Iran nuclear accord in the coming days, which would prompt a congressional review period on the accord.