Trump On Chief Of Staff John Kelly: He’ll Be Here For The Next 7 Years

President Donald Trump offered an endorsement of sorts for White House chief of staff John Kelly this weekend as rumors... 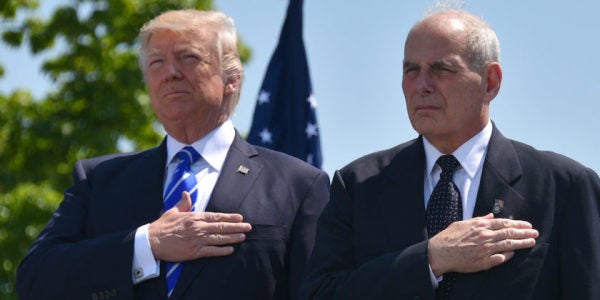 President Donald Trump offered an endorsement of sorts for White House chief of staff John Kelly this weekend as rumors grew that Kelly may not last in the administration.

“He'll be here, in my opinion, for the entire remaining seven years,” Trump said.

Kelly has recently found himself caught in the middle of a deteriorating relationship between Trump and Secretary of State Rex Tillerson, who has, on occasion, expressed frustration with the president and shown a lack of interest in his own staff at the State Department.

As whispers surrounding Tillerson reached a crescendo last week with reports that Tillerson called Trump a “moron” in front of national security staff, Kelly jumped into the fray to calm the tensions, a role in which Kelly has found himself frequently. A source close to the president spoke on Kelly's troubles last week, telling CNN, “Every day for John Kelly ends in 'why'? Every day is tense.”

Kelly skipped a planned trip with the president to Las Vegas, ostensibly to huddle with other top administration officials on how to control the Tillerson fallout.

This is not the first time Kelly has been at odds with Trump since he was appointed chief of staff in July. Tension arose as Kelly enacted sweeping changes with West Wing protocols, including managing Oval Office visitors and filtering the information that reaches the president.

“There's no question there's friction in how Kelly approaches how the White House should run and how Trump approaches it,” former Clinton chief of staff Leon Panetta told CNN. “It does make sense to me that John Kelly would try to prevent additional disruption from occurring.”