Trump just called on China to investigate the Bidens 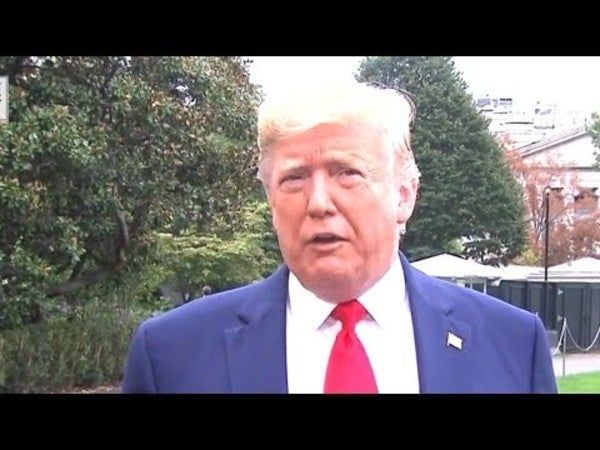 As he left the White House for a visit to Florida, Trump told reporters he believed Beijing should investigate Biden and his businessman son Hunter Biden.

“And by the way, likewise, China should start an investigation into the Bidens. Because what happened in China is just about as bad as what happened with Ukraine,” Trump said.

Trump and his personal lawyer Rudy Giuliani have accused former vice president Biden, a leading contender for the Democratic Party nomination to run against Republican Trump in the 2020 election, of improperly assisting his son's business ventures in Ukraine and China, but have offered no evidence.

Trump asked Ukrainian President Volodymyr Zelenskiy in a phone call in July to investigate Biden and his son over allegations of corruption. Hunter Biden was on the board of a Ukrainian gas company.

The revelation of the request by a whistleblower prompted House of Representatives Speaker Nancy Pelosi to announce a formal impeachment investigation against Trump last week.

Trump froze $400 million in U.S. aid to Ukraine shortly before he asked its president for the favor, prompting accusations from Democrats that he had misused U.S. foreign policy for personal gain.

The impeachment probe has angered Trump, whose volatile presidency survived a two-year federal probe that found Russia had intervened to help him win the White House in 2016.

Trump in July 2016 publicly encouraged Russian involvement in that year's presidential election campaign concerning cyber-espionage targeting Democratic candidate Hillary Clinton. Trump, referring to a controversy surrounding Clinton's emails, said at that time: “Russia, if you're listening, I hope you're able to find the 30,000 emails that are missing. I think you will probably be rewarded mightily by our press.”