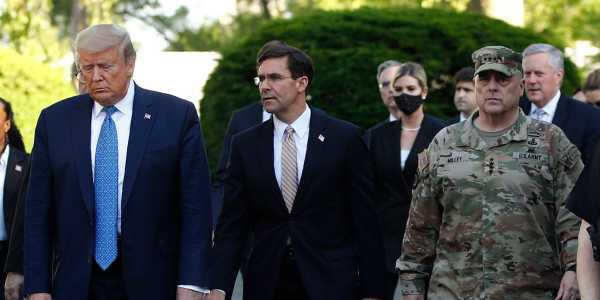 Secretary of Defense Mark Esper says he “didn't know” where he was going when he walked with the president through a park forcefully cleared of protesters for a photo-op at a damaged church, telling NBC News that he thought he was going to see the troops and look at a vandalized bathroom.

“I thought I was going to do two things: to see some damage and to talk to the troops,” Esper told NBC Tuesday night. “I didn't know where I was going.” He added that he had “no idea” about the plans to disperse protesters by force.

Monday evening, President Donald Trump announced plans to dispatch “thousands and thousands of heavily armed soldiers, military personnel, and law enforcement officers” to respond to unrest following the death of George Floyd in Minneapolis last week. “We will end it now,” he said.

After his address, the president, accompanied by Esper, Chairman of the Joint Chiefs of Staff Gen. Mark Milley, and others, walked through Lafayette Park, which moments earlier had been aggressively cleared of protesters, to take photos holding a Bible in front of St. John's Episcopal Church.

Trump reportedly wanted the photo-op at the church after he was mocked for hiding from protesters in a bunker.

Esper's version of events is consistent with that relayed by a senior defense official earlier in the day.

The official said that Esper and Milley were heading to the FBI field office in DC when they were called to the White House to give an update to the president.

“As that meeting concluded, the President indicated an interest in viewing the troops that were outside, and the Secretary and the Chairman went with him to do so,” the senior defense official said, according to reporters who were on the press call.

The official, explaining that neither Esper nor Milley were aware of “the decision to clear the square,” added that “once they began that walk off of the White House grounds with the President, they continued with him.”

Esper told NBC News Tuesday that he is proud of the National Guard for its response to not only the ongoing unrest but also COVID-19. “I wanted to go out and thank these young men and women,” he said.