President Donald Trump said on Thursday the United States killed Iranian military commander Qasem Soleimani shortly after he landed in Iraq last week in part because "they were looking to blow up our embassy." 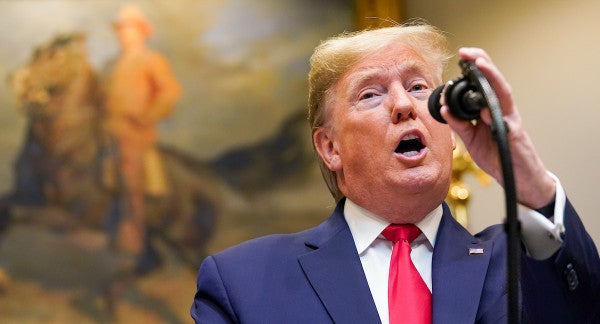 WASHINGTON (Reuters) – President Donald Trump said on Thursday the United States killed Iranian military commander Qasem Soleimani shortly after he landed in Iraq last week in part because “they were looking to blow up our embassy.”

The remarks could shed more light on what so far has been largely vague descriptions of the intelligence that drove Trump's administration to conclude that killing Soleimani and disrupting his plots would justify any fallout Washington may face.

The United States saw some of the repercussions from its strike on Wednesday, when Iran fired 16 missiles at bases in Iraq that host U.S. forces – an attack that the Pentagon believes was designed to inflict casualties but which killed and injured no one.

“We caught a total monster and we took him out and that should have happened a long time ago. We did it because they were looking to blow up our embassy,” Trump told reporters at the White House.

Trump said the United States also carried out the strike because of a rocket attack on a U.S. military base in Iraq by an Iran-backed militia in December that killed a U.S. contractor, which U.S. officials believe Soleimani had a role in orchestrating.

That was followed by violent protests by supporters of Iran-backed militia outside of the U.S. embassy in Baghdad. Trump said Soleimani had wanted those protests to become more violent.

“That was a totally organized plot. And you know who organized it. That man right now is not around any longer. Okay? And he had more than that particular embassy in mind,” he said.

Asked about Trump's remarks on the plot to blow up the Baghdad embassy, a senior U.S. defense official, speaking on condition of anonymity, noted Soleimani had orchestrated protests at the embassy and acknowledged there had been such plotting to blow up the embassy.

The official declined to provide details on the U.S. intelligence.

Although Iran's foreign minister has said the missile strikes on Iraqi bases that house U.S. forces had concluded Tehran's response to the killing of Soleimani, Iran's powerful Revolutionary Guards issued new threats to Washington on Thursday.

One senior commander warned of “harsher revenge soon” and another said Wednesday's missile strikes were only the start of a series of attacks across the region.

Brigadier General Esmail Ghaani, the new head of the Quds Force, which runs Iran's foreign military operations, said he would follow the course pursued by his slain predecessor Soleimani.

Soleimani carved out a sphere of Iranian influence running through Syria, Lebanon, Iraq and Yemen, challenging regional rival Saudi Arabia as well as the United States and Israel.