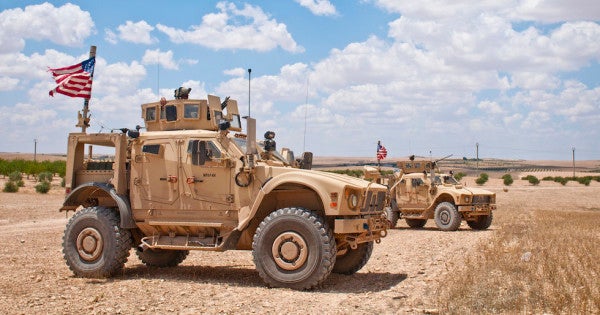 Trump's spy chief as well as top officials from the CIA, Defense Intelligence Agency and FBI sat before a Senate committee on Tuesday and conceded that North Korea and Islamic State remain critical security threats to the U.S., even as the president contends that progress has been made in getting Kim Jong Un to disarm and in eradicating the extremist group in Syria.

Director of National Intelligence Dan Coats led off with the annual “Worldwide Threat Assessment of the U.S. Intelligence Community,” which stated bluntly that North Korea is unlikely to give up its nuclear capabilities because Kim views “nuclear arms as critical to regime survival.”

North Korea continues to develop its nuclear program and “is unlikely to give up all of its WMD stockpiles, delivery systems, and production capabilities,” Coats said, referring to weapons of mass destruction.

Yet the president has boasted that his personal diplomacy, including a historic meeting with Kim in Singapore last year, convinced North Korea to cease launching intercontinental ballistic missiles and testing nuclear bombs, and that the two men agreed to work toward denuclearization. Those efforts prevented a major war in Asia, Trump says.

But analysts disagree, saying North Korea has a very different definition of denuclearization than the U.S. While Kim has stopped some weapons testing, they say, he has used the time since meeting Trump to continue stockpiling nuclear material and produce more missiles.

Comparing Tuesday's intelligence report “next to Trump's statements of a year ago that the North Korean nuclear problem has been solved, that they are denuking all over the place, that would seem to be inconsistent,” said Bruce Klingner, a senior research fellow at the Heritage Foundation in Washington.

The president calls criticism of his North Korea policy “fake news” and the White House is planning a second summit with Kim for late February. Yet his spy agencies' conclusions go further in highlighting the North Korean danger, saying the Pyongyang government also presents a top cybersecurity threat. The report said that North Korea was responsible for the assassination in Malaysia two years ago of a half brother of Kim's. Kim Jong Nam was killed with a nerve agent.

Analysts worry the president's desire to claim more victories will be costly.

“There are a number of concerns of what could happen in the next summit, such as signing a peace declaration, accepting an 'ICBM only' agreement, or prematurely reducing U.S. forces before reducing the North Korean conventional threat,” Klingner said.

Turning to the Middle East, the report said thousands of Islamic State fighters and supporters remain in Syria and Iraq, and that they will continue to conduct attacks, even as Trump vows to pull American forces out of northern Syria. “We assess that ISIS will seek to exploit Sunni grievances, societal instability, and stretched security forces to regain territory in Iraq and Syria in the long term,” the report said.

Coats said the group will try to “undermine stabilization efforts and retaliate against its enemies.”

That ability was shown earlier this month, when Islamic State claimed responsibility for a suicide attack that killed four Americans on patrol in the northern Syrian town of Manbij. Days later, a suicide car bombing in Syria's northeastern region of Hasakah targeted a U.S. military and Kurdish convoy.

“Islamic State are hardened guerrilla fighters,” said Paul Sullivan, a Middle East expert at Georgetown University's Center for Security Studies. “This could be a time of extreme violence without the threat of losing territory as a cost factor.”

The Syria withdrawal announcement is part of a broader effort by Trump, who is seeking to fulfill campaign promises to get the U.S. out of intractable wars. Separately, the U.S. is pushing to flesh out a framework agreement with the Taliban so American forces can leave Afghanistan after nearly 18 years.

Those efforts prompted a rare rebuke from one of Trump's closest Senate allies, Majority Leader Mitch McConnell. The top Senate Republican proposed a measure on Tuesday urging the U.S. to continue the fight against Islamic State and al-Qaida in Syria and Afghanistan and avoid any “precipitous withdrawal.”

Even if the president's claims of success on the international stage are taken at face value, Coats said in a written summary of the intelligence community's assessment that threats to national security will “expand and diversify in the coming year” as China and Russia “compete more intensely” with the U.S. — and as their interests converge.

The spy chief, who has shown his willingness to be independent of the White House on key issues, also cited strains with allies under Trump's “America First” policies. Coats said some U.S. allies and partners are “seeking greater independence from Washington in response to their perceptions of changing U.S. policies on security and trade” and are pursuing their own new partnerships.

One critical threat that Trump has identified is security on the southern U.S. border. After a five-week government shutdown, the president has continued to say that he might declare a national emergency unless Democrats approve billions in border wall funding.

But a threat on the southern border isn't even mentioned in the intelligence agency report. The closest the assessment comes is to say is that in the Western Hemisphere “flagging economies, migration flows, corruption, narcotics trafficking, and anti-U.S. autocrats will present continuing challenges to U.S. interests.”

WATCH NEXT: This Guy Sent His Resume And Cover Letter To ISIS