President Trump’s COVID-19 symptoms are ‘very concerning,’ with next 48 hours ‘critical’ to recovery

"The president’s vitals over the last 24 hours were very concerning and the next 48 hours will be critical in terms of his care." 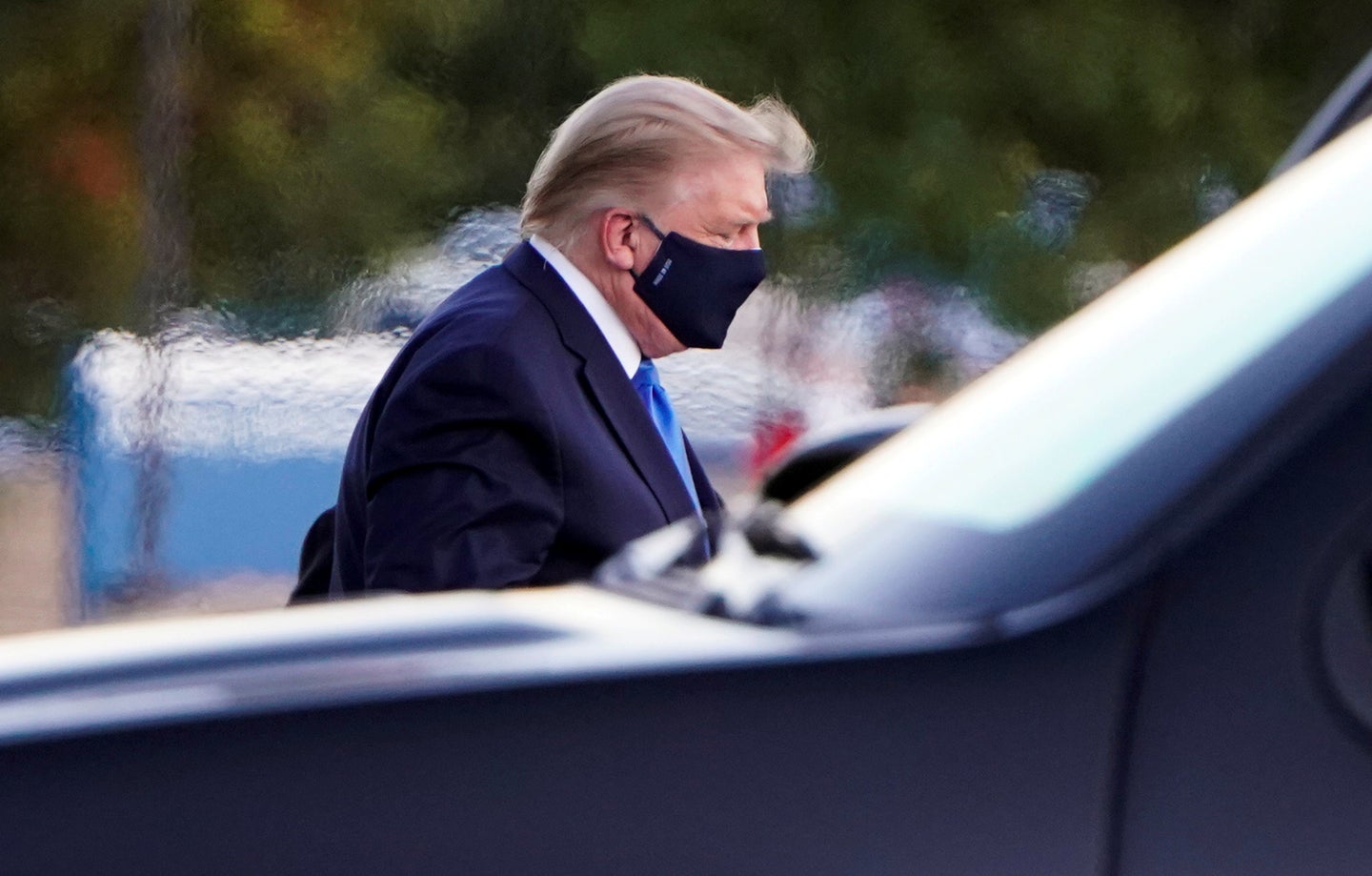 WASHINGTON (Reuters) – President Donald Trump is not yet on a clear path to recovery from COVID-19 and some of his vital signs over the last 24 hours were very concerning, a person familiar with his health said on Saturday.

The source’s assessment of the Republican president’s medical status seemed to be at odds with that of a team of doctors who said at a press conference earlier on Saturday that he was “doing very well.”

One of those doctors said Trump had told them “‘I feel like I could walk out of here today.'”

The source, who asked not to be identified, said the next 48 hours will be critical in terms of Trump’s care.

“The president’s vitals over the last 24 hours were very concerning and the next 48 hours will be critical in terms of his care,” a source familiar with the president’s health told White House pool reporters. “We’re still not on a clear path to a full recovery.”

Here’s your likely "person familiar with the president’s health”: https://t.co/GjgEXuedT8

Trump left the White House and was moved to Walter Reed National Military Medical Center near Washington on Friday just hours after he was diagnosed with COVID-19.

White House doctor Sean P. Conley told reporters outside the hospital on Saturday that Trump had not experienced difficulty breathing, and currently was not on supplemental oxygen.

“The team and I are extremely happy with the progress the president has made,” Conley said.

Conley would not provide a timetable for Trump’s possible release from the hospital.

The White House has said Trump, 74, will work in a special suite at the hospital for the next few days as a precautionary measure. He had no public events scheduled on Saturday.

The diagnosis was the latest setback for the Republican president, who is trailing Democratic rival Joe Biden in opinion polls ahead of the Nov. 3 presidential election.

Trump has downplayed the threat of the coronavirus pandemic from the outset, even as the disease has killed more than 200,000 Americans and hammered the U.S. economy.

Conley said Trump had received the first dose of a five-day course of Remdesivir, an intravenous antiviral drug sold by Gilead Sciences Inc that has been shown to shorten hospital stays. He is also taking an experimental treatment, Regeneron’s REGN-COV2, one of several experimental COVID-19 drugs known as monoclonal antibodies, as well as zinc, Vitamin D, famotidine, melatonin, and aspirin, Conley has said.

Trump announced on Twitter early on Friday that he and the first lady, Melania Trump, had contracted the virus.

He is at high risk because of his age and weight. He has remained in apparent good health during his time in office but is not known to exercise regularly or to follow a healthy diet.

Vice President Mike Pence, who would take over presidential duties if Trump became severely ill, tested negative, a spokesman said. The former Indiana governor, 61, is working from his own residence about three miles from the White House.

British Prime Minister Boris Johnson, who was himself hospitalized with COVID-19 in April, told reporters on Saturday he had no doubt Trump would make a strong recovery.

Chinese President Xi Jinping sent a message to Trump and his wife on Saturday, wishing them a speedy recovery, Chinese state TV said.

The Trump campaign on Friday suspended in-person campaign events involving the president or his family. But Pence will continue stumping for the president and Trump’s campaign said on Saturday that Pence will host an Oct. 8 event in Peoria, Arizona.

Trump’s campaign manager, Bill Stepien, also tested positive for COVID-19 on Friday and will work from home, according to a senior campaign official.

Biden pulled ads attacking Trump off the air but otherwise continued his campaign, traveling to Michigan on Friday after testing negative for the virus.

In a Twitter post on Saturday, Biden urged Americans to don masks. “Don’t just do it for yourself. Do it for the people you love.”

Lee and Tillis are both members of the Republican-controlled Senate Judiciary Committee, which is scheduled to begin hearings on Barrett’s nomination on Oct. 12.

On Saturday, U.S. Senate Majority Leader Mitch McConnell said all Senate floor activity would be rescheduled until after Oct. 19, but committee work, including Barrett’s confirmation hearing, would continue.