Trump To Soldiers: It’s A New Day For The US Military

President Donald Trump promised a new day for the U.S. military on Monday, telling soldiers from the Army's 10th Mountain... 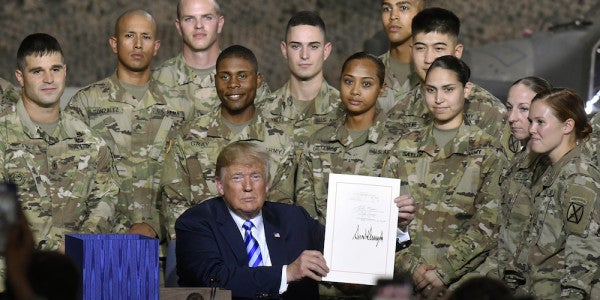 President Donald Trump promised a new day for the U.S. military on Monday, telling soldiers from the Army's 10th Mountain Division that they deserve better pay and equipment as he signed a bill authorizing $716 billion in defense spending.

“Every day the Army is fighting for us, and now we are fighting for you 100 percent,” Trump told about 500 soldiers gathered in a hangar at Fort Drum. “Nobody understands how stretched our military has become better than the soldiers of the 10th Mountain Division.”

Trump made his comments before signing the John S. McCain National Defense Authorization Act, a bill that boosts pay for military personnel by 2.6 percent and provides big increases in spending on military equipment.

“The National Defense Authorization Act is the most significant investment in our military and our war fighters in modern history, and I'm very proud to be a big, big part of it,” Trump told the soldiers in his first trip to Upstate New York as president.

“I want to say, very strongly, there is no better place than right here at Fort Drum to celebrate its passage,” the president said. “After years of devastating cuts, we're now rebuilding our military like we never have before.”

Trump did not mention Sen. John McCain, R-Ariz., during his speech, even though Congress honored the 81-year-old senator by putting his name on the annual bill authorizing military spending.

Trump has openly mocked and criticized McCain in a feud that began in 2015 when the president said McCain was not a war hero.

The president did single out Rep. Martha McSally, R-Ariz., for praise. McSally, who was in the audience, is running for the Arizona Senate seat that will open with the retirement of GOP Sen. Jeff Flake.

Trump mostly stuck to his script, reading from a teleprompter during a speech that lasted a little more than 30 minutes. But he did take one swipe at the media when he pointed out reporters covering his speech. He congratulated himself for not using the term “fake news.”

“I'm so proud of myself,” Trump said. “I didn't call them the fake news media…We know the real truth, but I won't say it today.”

Trump was greeted when he arrived at Fort Drum by Vice President Mike Pence, who arrived at the Army post about 30 minutes before the president.

Pence was joined on the tarmac by Rep. Elise Stefanik, R-Willsboro, and Maj. Gen. Walt Piatt, commanding general of the Army's 10th Mountain Division, which is based at Fort Drum.

Trump received a 21-gun salute as a military band played Hail to the Chief on the tarmac at Fort Drum's Wheeler-Sack Army Airfield.

Stefanik, a member of the House Armed Services Committee, invited Trump in March to visit Fort Drum. Stefanik has advocated for the Army post to receive increased funding, and has asked the Pentagon to build an East Coast missile interceptor site at Fort Drum.

Trump later introduced Stefanik to the Army soldiers, mispronouncing her name, but praising her persistence in asking him to visit Fort Drum.

Fort Drum is the largest single-site employer in New York state, and its 10th Mountain Division has been the most deployed unit in the Army since 2001.

Before his speech, Trump stood on the tarmac at the airfield to watch a previously unannounced air assault exercise with 10th Mountain Division Combat Aviation Brigade soldiers and Black Hawk helicopters.

The president also took some time to chat with three Army soldiers, their faces covered in camouflage paint, who took part in the exercise.

Trump planned to fly after his speech to Griffiss International Airport in Rome on his way to a private fundraiser in Utica for Rep. Claudia Tenney.

Tickets to the fundraiser at the Hotel Utica cost up to $15,000 for donors who want to join Trump in a roundtable discussion and have their photo taken with the president.