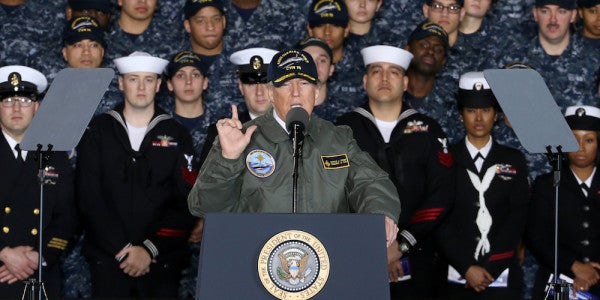 Trump on Nov. 6 asked to amend an earlier 2018 defense budget request by allocating an additional $4 billion for missile defense, $1.2 billion for the administration’s new Afghanistan effort and another $700 million for Navy ship repairs.

“This request supports additional efforts to detect, defeat, and defend against any North Korean use of ballistic missiles against the United States, its deployed forces, allies, or partners,” Trump said in the amendment request, which came in the form of a letter sent late Monday to House Speaker Paul Ryan, Republica from Wisconsin.

On Nov. 6, the chairmen of the House and Senate Armed Services committees said the timing of Trump’s letter means the proposals can be incorporated into ongoing negotiation talks for the defense bill, called the National Defense Authorization Act.

“We welcome the president’s amendment to his initial defense budget request and look forward to giving it the serious consideration it deserves,” Sen. John McCain, Republican from Arizona, and Rep. Mac Thornberry, Republican from Texas, said in a joint statement. “The additional request would provide resources to support our renewed efforts in Afghanistan and much-needed funding to repair the Navy ships damaged in recent collisions at sea.”

In July, the House approved a $696 billion defense budget, while the Senate approved a nearly $700 billion plan in September. Either would require congressional action to exceed current budget caps that limit defense spending to $549 billion for the 2018 fiscal year.

Both plans went further than the original Trump request. For example, the Senate bill allocates $8.5 billion for missile defense, which was $630 million more than what was originally requested by the Trump administration.

“The House and Senate Armed Services committees have already authorized many of these missile defense programs in our respective defense bills,” McCain and Thornberry said.

“The request also includes the costs necessary to repair damage to and restore the operational readiness of the USS John S. McCain and the USS Fitzgerald,” Trump said. “These ships provide critical naval presence and additional ballistic missile defense capabilities in the Asia-Pacific theater.”

Trump said the requests for missile defense and Navy ship repairs should be considered emergency funding. The South Asia plan, he said, can be paid for with money from the separate Overseas Contingency Operations fund, which isn’t subject to budget cap requirements.

Separately, Trump said the $1.2 billion for his South Asia strategy will address the increase in troops needed in Afghanistan. Trump unveiled his plans to boost U.S. forces there earlier this year.

Initially, Trump had declined to discuss more troops for Afghanistan, but Pentagon officials have since said the plans would increase the number of servicemembers there by at least 3,500.

Trump confirmed that figure on Nov. 6.

“The additional resources would enable to deploy an additional 3,500 troops, and includes funding for urgent needs and special operations forces capabilities,” he said.

The same letter also said Congress needed to look at his border wall request, which at $1.6 billion would be a down payment for the effort, Trump said.

For now, McCain and Thornberry said they were pleased they could consider Trump’s plan to increase defense spending.

“The timely submission of this budget amendment means that the NDAA conferees will be able to consider this request in time to incorporate the additional funding into the final agreement,” they said.