President Donald Trump announced last summer that his proposed ban on transgender people in the U.S. military was the product... 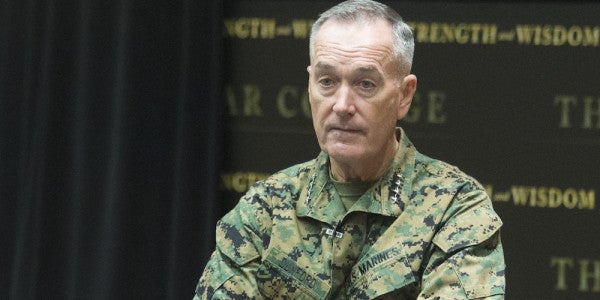 President Donald Trump announced last summer that his proposed ban on transgender people in the U.S. military was the product of “consultation” with “Generals and military experts.”

But the country’s highest-ranking general, Joint Chiefs of Staff Chairman Joseph Dunford, wasn’t among those whom Trump consulted, according to emails unearthed Tuesday.

In two leaked correspondences obtained by BuzzFeed News, Dunford told generals of the Air Force, Army, Marines, National Guard and Navy that Trump’s July 26 announcement proposing to ban transgender people from serving in the armed forces “was unexpected” and something he had “not” been “consulted” about.

“When asked, I will state that I was not consulted,” Dunford wrote in one of the emails.

The revelation casts further doubt over Trump’s contentious ban, which has been struck down by federal judges. In light of the court rulings, the Pentagon announced in December that it would allow transgender people to enroll in the U.S. military, despite opposition from the White House. The Trump administration responded that it would look into legal options to “ensure” that Trump’s proposed ban can be implemented.

Neither the White House nor the Pentagon responded to requests for comment from the New York Daily News on Tuesday on which “Generals and military experts” Trump in fact consulted.

Judges and critics have questioned whether Trump consulted any military officials at all before announcing in a series of tweets that transgender people shouldn’t “serve in any capacity in the U.S. military” because the country “cannot be burdened with the tremendous medical costs and disruption that transgender in the military would entail.”

In a ruling this past November, U.S. District Judge Marvin Garbis asserted that “President Trump’s tweets did not emerge from a policy review,” but was rather “capricious, arbitrary and unqualified.”

Trump’s proposed ban blindsided military officials and drew the ire of LGBTQ activists and politicians across the aisle, as transgender troops already in the military questioned what the president’s unexpected announcement would mean for them.

The “tremendous medical costs” that Trump referred to were scrutinized by experts — some of whom pointed out that the military spends five times as much on Viagra and other erectile dysfunction medications than it does on medical expenses for transgender troops.