Months after becoming president in 2017, Donald Trump began taking meetings with enlisted U.S. service members who deployed to Afghanistan in order to get a better understanding of America's longest war. 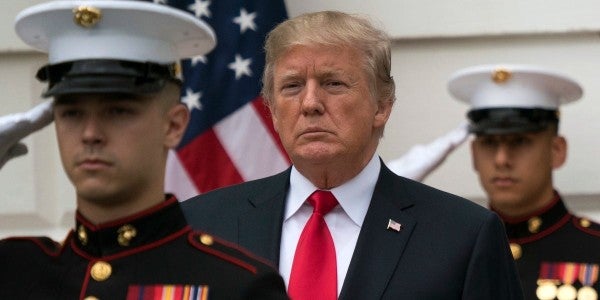 Months after becoming president in 2017, Donald Trump began taking meetings with enlisted U.S. service members who deployed to Afghanistan in order to get a better understanding of America's longest war.

“I want to sit down with some enlisted guys that have been there,” Trump told advisers, according to the national-security journalist Peter Bergen's latest book, Trump and His Generals: The Cost of Chaos.

“I don't want any generals in here. I don't want any officers,” Trump added, according to Bergen's book, which is sourced from dozens of interviews with current and former White House officials and military officers. “I just want enlisted guys.”

The meetings were intended for candid discussions about the war in Afghanistan, which was nearing its sixteenth-year at the time, with US troops who served on the front lines.

Enlisted service members are typically viewed as the lifeline of the military — they are the men and women who conduct the specific tasks given to them by their officers, whose primary purpose is to lead. Compared to their commissioned counterparts, enlisted troops are also unencumbered by the day-to-day politics of the military, and may have given an unfiltered assessment of the war in talks with their commander-in-chief.

One of the first groups of Afghanistan veterans to speak with Trump were U.S. Navy SEALs who spoke critically of the war.

“It's unwinnable. NATO's a joke. Nobody knows what they're doing,” the SEALs told Trump, according to Bergen's book. “We don't fight to win. The morale is terrible. It's totally corrupt.”

The North Atlantic Treaty Organization joined the fight against al-Qaida in Afghanistan after the 9/11 attacks, and led the International Security Assistance Force of 130,000 troops until 2014. The organization's efforts in Afghanistan have been deeply criticized by those who point towards the continued presence of the Taliban in the region, and the 2,400 American deaths in the conflict.

Details of Trump's conversation with the SEALs also comes amid an extensive Washington Post investigation, dubbed the “The Afghanistan Papers,” in which senior US officials are accused of mischaracterizing the war. Many of these senior officials, including US Army Lt. Gen. Michael Flynn, were discovered to have held private reservations about the war effort even as the White House and Defense Department publicly advanced an optimistic outlook.

Two years before the publication of The Afghanistan Papers, the Navy SEALs appeared to concur with the views held by these senior military leaders.

“The officials in the government are awful people. They lie to you,” the SEALs said to Trump.

Trump appeared to be receptive to the opinions floated during the meeting and said, “I want to do this again,” according to Bergen. Trump later met with four U.S. Army and Air Force senior enlisted servicemen at the White House on July 18, 2017.

“I've heard plenty of ideas from a lot of people, but I want to hear it from the people on the ground,” Trump said at a press conference at the time.

One day after the meeting, Trump was said to have met with senior U.S. military officials in the Situation Room at the White House. In the meeting, Trump said the U.S. service members he spoke with knew “a lot more than you generals,” and added that “we're losing” in Afghanistan.

Trump also compared the senior military leaders with a consultant for a Manhattan restaurant from the late 1980s. Instead of heeding the advice of an overpaid consultant who merely suggested expanding a kitchen for renovations, Trump argued that it would have been more prudent, and cheaper, to solicit the advice of waiters from a restaurant.