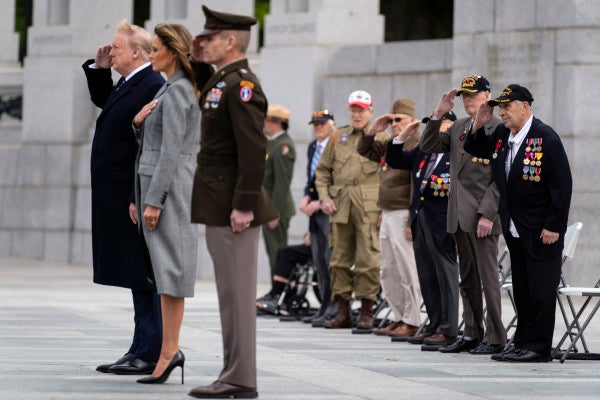 President Donald Trump and military and veterans affairs leaders did not wear masks during a Friday ceremony to mark the 75th anniversary of VE-Day despite the ongoing novel coronavirus (COVID-19) pandemic.

According to the Associated Press, the ages of the veterans in attendance ranged from 96 to 100, making them particularly vulnerable when it comes to potentially contracting and dying from COVID-19, according to the Centers for Disease Control and Prevention.

The ceremony came amid renewed concerns over the exposure senior U.S. leaders to the virus after Trump's military valet and Vice President Mike Pence's press secretary tested positive for the virus this week.

Both Trump and Mike Pence both subsequently tested negative for COVID-19, the White House said. According to Pentagon spokesman Jonathan R. Hoffman, Esper also tested negative a mere two hours before the event at the WWII memorial.

“The Secretary takes COVID mitigation measures seriously and that is why he was tested before the event and after the one incredible photo with these great heroes remained appropriately socially distant throughout this outdoor event,” Hoffman told the Washington Post.

The Pentagon had perviously mandated masks for U.S. service members, civilian employees and their families at all DoD installations, and the absence of masks among senior leaders in attendance sparked concern among advocacy groups

“We need the president and his closest aides to immediately start modeling CDC guidelines and behavior that keeps veterans and elderly Americans safe, because what they’re doing right now is going to get people killed,” Vietnam Veterans of America associated policy director Kristofer Goldsmith told the Washington Post.

When asked about the lack of masks, the White House delivered a typical response: “Leave it to the media to question seven brave war heroes for joining the President of the United States at the Nation’s World War II Memorial on the 75th Anniversary of V-E Day.”

At least 828 veterans have died of COVID-19 as of Friday, according to the latest VA data.