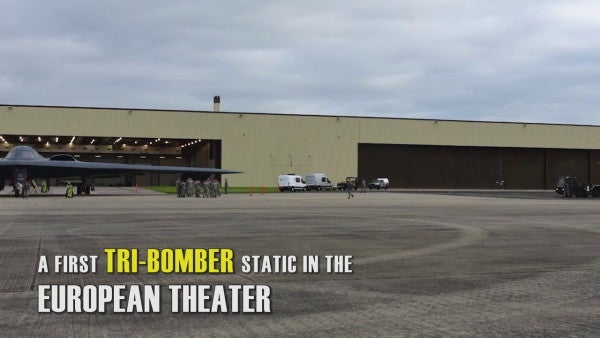 U.S. forces in Europe are getting smarter and more flexible. But they still lack firepower.

Wolters said EUCOM's mobility and intelligence operations have improved. He mentioned improvements to air bases in the Baltic states as well as the new base in Poland for Air Force MQ-9 drones.

Air Forces Europe oversees just three fighter wings. One in the United Kingdom flying F-15Cs and F-15Es and one each with F-16s in Italy and Germany.

The three wings combined possess fewer than 200 fighters, none of them stealthy. F-22 and F-35 stealth fighters and bombers including B-2 stealth bombers frequently deploy to Europe on a temporary basis as part of the $7-billion-a-year European Deterrence Initiative, Washington's response to Russia's 2014 invasion of Ukraine.

“You want to be able to put more targets at risk across the potential battle space, wherever that battle space may be,” Wolters said.

“With the current posture, we're probably not as fast or as deep as any commander would prefer, and to be more effective you would like to be able, for example, to deliver fires from all domains. Not just from the air, but from the maritime, from [Special Operations Forces], from space, from cyber and certainly from land.

Wolters said he and his fellow commanders must “ensure that we have fine-tuned the effect that both of us can deliver for a given problem set and a potential battle space location, to make sure that we've got the right fire at the right time coming from the right domain.”

But as a result of deep cuts that began in 2013, EUCOM lacks forces in the air, on the ground and on the sea. A U.S. Army regiment with 300 Stryker wheeled vehicles is the only mechanized American force permanently in Europe. The Army's 173rd Airborne Brigade also is based in Europe.

The Army also temporarily deploys one armored brigade at a time to the continent. A typical armored brigade has around 90 M-1 tanks and 130 M2 fighting vehicles plus around 18 M109 self-propelled howitzers.

Scaparrotti previously complained that EUCOM doesn't have enough warships. In March 2019 he told a Senate committee he wanted two more destroyers to supplement the four that the U.S. Navy already stations in Rota, Spain.

The general said he also wants a “better pace” of carriers and amphibious ships deploying to European waters, according to USNI News reporter John Grady. The extra ships would help deter “an evolving and modernizing Russian fleet,” Scaparrotti said.

The Navy is struggling to expand from 289 major warships to 355 in order to meet growing demand from regional commanders. The Air Force likewise has proposed to grow from 311 front-line squadrons to 386. Both efforts currently lack the necessary funding.

The California think-tank RAND in 2016 war-gamed a Russian invasion of the Baltics. In RAND's scenario, the Russian forces quickly overrun lightly-armed NATO forces. The Western alliance quickly deploys helicopters and air-mobile troops to confront the Russian advance. But NATO tanks are too slow to arrive.

Wolters said he and other commanders in Europe struggle to coordinate the forces that they do have in order to hit an enemy force fast enough and hard enough to defeat it. “Those are areas … none of us are satisfied with at this time.”

SEE ALSO: The Army Is Practicing To Take Down Enemy Aircraft In The Skies Over Europe