President Donald Trump on Tuesday said he will issue an executive order regarding U.S. historical monuments, as the movement to remove memorials that activists consider racist gains momentum, part of wider national protests over racial injustice 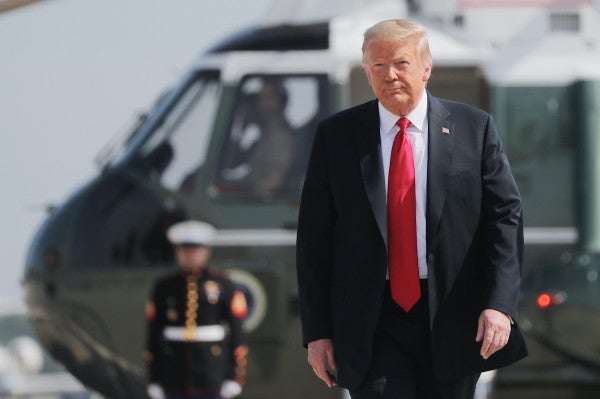 “They're not taking down our monuments,” Trump told reporters at the White House. “I will have an executive order very shortly and all it's going to really do is reinforce what's already there, but in a more uniform way.”

Trump also on Tuesday announced an authorization “effective immediately” to arrest anyone caught hurting a commemoration to an armed services member on federal land and threatened to use force on protesters in Washington.

The federal government, though, has had the power to jail or fine anyone vandalizing or destroying a memorial for 17 years under the Veterans Memorial Act.

Late on Monday protesters tried to topple a statue of former President Andrew Jackson near the White House. Jackson enslaved Black people as a plantation owner and is remembered for the Trail of Tears, a forced removal of Native Americans from the South that killed thousands.

Trump told reporters Tuesday “numerous people” were in jail for the Jackson statue attempt and the federal government is “looking at long-term sentences.”

Many statues and monuments targeted by crowds in recent weeks pay homage to the rebel Confederacy from the nation's Civil War. Critics say such symbols wrongly honor those who perpetuated slavery. Calls to take them down follow a wave of protests sparked by the May 25 death of George Floyd, a Black man killed in police custody.

On Tuesday Trump tweeted “there will never be an 'Autonomous Zone' in Washington, D.C., as long as I’m your President. If they try they will be met with serious force!”