With little attention, President Donald Trump’s administration has been quietly loosening firearms restrictions in the United States after successfully seeking... 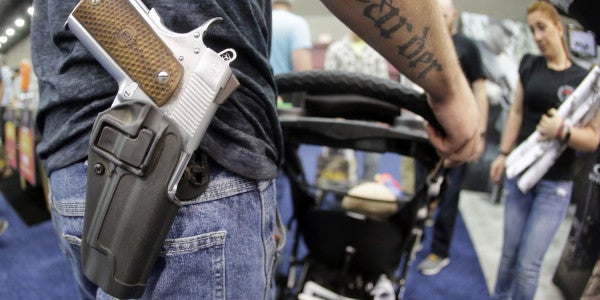 With little attention, President Donald Trump’s administration has been quietly loosening firearms restrictions in the United States after successfully seeking the support of gun owners on the campaign trail.

His agencies narrowed the definition of “fugitive,” a change that cuts the number of people who’ll be included in a database designed to keep firearms from people who are barred from owning them.

Federal officials have also signaled that they may no longer defend the Army Corps of Engineers’ ban on carrying loaded firearms and ammunition on federal lands.

Trump signed a bill behind closed doors that killed an Obama-era regulation that required the government to add to the no-buy list people whom the Social Security Administration has deemed eligible for mental disability payments. He signed another one that lifted restrictions on hunting on federal lands in Alaska.

With Republicans in control of the White House and Congress, gun rights groups are on the offensive for the first time in years, aggressively looking to push a series of new laws on Capitol Hill and regulations in various federal agencies to ease restrictions.

The National Rifle Association was a strong backer of Trump from the start, unlike most traditional conservative organizations, many of which were leery of the brash businessman-turned-reality-TV-host and political novice. It endorsed him earlier than it had other candidates in previous years and became one of his top donors, with $30 million in contributions and TV ads that targeted his opponent, Hillary Clinton.

“Ultimately you judge a politician on whether he or she keeps their promises that they made during the campaign,” said Chris Cox, chief lobbyist and principal political strategist for the Institute for Legislative Action, the NRA’s lobbying arm. “NRA members and supporters across this country are very pleased with what we’ve seen out of this administration so far. But there is still a lot of work to do.”

Before he hit the campaign trail, Trump, who says he doesn’t hunt but does own a gun, had come out in favor of a waiting period for gun purchases and a ban on assault weapons. But after he entered the race, he changed his views, speaking forcefully on behalf of gun rights regularly as he found support in many rural pockets of the country.

“We’re gravely concerned and have been all along … to the extent he was making himself beholden to the corporate gun lobby,” said Dan Gross, president of the Brady Campaign to Prevent Gun Violence. “He is looking to pay them back.”

Trump has already rescinded 13 Obama-era regulations through the rarely invoked Congressional Review Act, which allows lawmakers and a new president to reverse regulations imposed recently by a previous president. Two of those reversals were related to firearms — those involving the Social Security Administration and hunting on federal lands in Alaska.

“We inherited, this administration did, the biggest regulatory burden, we believe, of any president in American history,” said Marc Short, director of legislative affairs for the White House. “We believe this is fulfilling a campaign promise.”

Gun rights groups have a pair of bills they are pushing in Congress this year: allowing Americans to carry concealed firearms from state to state — bypassing a confusing patchwork of laws — and making it easier and cheaper to purchase silencers. But while those fights will play out in front of cameras on Capitol Hill, others worry about what is being done behind the scenes.

On his first day as interior secretary, Zinke canceled a ban on the use of lead ammunition on federal lands — leading some to worry that the lead could be ingested by birds — and directed all agencies managing federal lands to identify areas where hunting could be expanded.

The Army Corps of Engineers, which controls 12 million acres of land around lakes and rivers, allows hunting in some of the areas it controls. But it’s banned carrying loaded firearms and ammunition on its lands since the 1970s. Courts have disagreed on whether the ban violates the Second Amendment.

The NRA has long advocated that those federal lands be treated the same as national parks, where some guns are allowed or where state gun laws apply. Last year, it supported a bill that would have allowed gun owners to carry firearms on Army Corps of Engineers land.

And in February, the Justice Department resolved a long-standing dispute between the FBI and the ATF about who should be called a fugitive — and be barred from buying a firearm.

The ATF considers a fugitive to be anyone subject to an arrest warrant who crossed state lines to avoid arrest. The FBI had a broader definition, describing a fugitive as anyone who’d left the city or county where the warrant had been issued.

In a Feb. 15 memorandum, the FBI agreed to adopt the narrower definition, saying a person must have fled the state to avoid imminent prosecution or court testimony to be considered a fugitive. The NRA did not weigh in on the issue.