Trump Frames Anti-Terrorism Fight As A Clash Of Civilizations

WARSAW, Poland — President Donald Trump’s speech in Warsaw cast the fight against terrorism as a clash of civilizations, adopting... 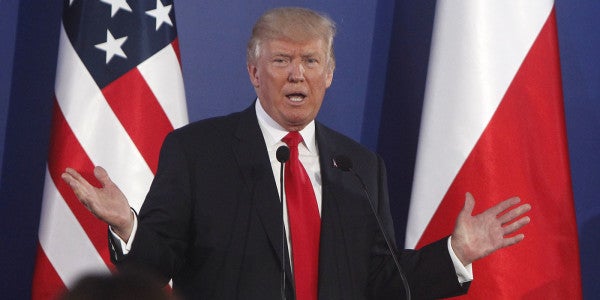 WARSAW, Poland — President Donald Trump’s speech in Warsaw cast the fight against terrorism as a clash of civilizations, adopting a framework that his two predecessors had determinedly avoided and linking it to his controversial policies on immigration.

The speech on Thursday offered extended praise for what Trump described as the unique virtues of Western civilization, which he said faced “dire threats.”

Those, he said, emanate from the “south or the east” — apparently a thinly veiled reference to the Islamic world — and could “erase the bonds of culture, faith and tradition that make us who we are.”

“The fundamental question of our time is whether the West has the will to survive,” he said, one of nearly a dozen times that he invoked the idea of “will” during the course of the approximately 40-minute speech.

Trump had expressed similar ethnocentric ideas during his presidential campaign, but had never before described them at such length.

“If we are looking for a Trump doctrine, this is as close as we are going to get,” said Michal Baranowski, the director of the German Marshall Fund office in Warsaw and an expert on Polish and European politics. “It is not a foreign policy doctrine — it is almost a manifesto.”

The speech marked a shift from the rhetorical stance Trump took just a few weeks ago when he was in Saudi Arabia. In a speech on terrorism in Riyadh, the Saudi capital, he said that “this is not a battle between different faiths, different sects or different civilizations. This is a battle between barbaric criminals who seek to obliterate human life, and decent people of all religions who seek to protect it.”

The more pointed language of his Warsaw speech reflected the influence of the two strongest advocates of populist nationalism among Trump’s advisors, his strategist, Stephen K. Bannon, and his policy adviser, Stephen Miller, who wrote much of the speech. Although Miller had a strong hand in the Saudi speech as well, the language in that address was heavily negotiated in advance.

Trump’s words also departed sharply from the approach taken by his predecessors.

Since the terrorist attacks on Sept. 11, 2001, both Presidents George W. Bush and Barack Obama repeatedly rejected the idea that the fight against terrorism should be seen as a battle between the West and Islam or any other culture.

Bush, for example, in one of his most extensive explanations of his policies, five years after 9/11, described the war against terrorism as one in which “all civilized nations are bound together” in a “struggle between moderation and extremism.”

Obama went further, repeatedly insisting that terrorism did not pose an “existential” threat to the U.S. the way communism or Nazism had.

Trump, by contrast, speaking in front of a monument to Poland’s resistance to the Nazis in World War II and praising the country for resisting Soviet domination, explicitly linked the fight against what he labeled “radical Islamic terrorism” to those earlier struggles.

The question now is whether “we have the confidence in our values to defend them at any cost,” he said. “Do we have enough respect for our citizens to protect our borders? Do we have the desire and the courage to preserve our civilization in the face of those who would subvert and destroy it?”

And he linked that need for defense to his immigration policies. “While we will always welcome new citizens who share our values and love our people, our borders will always be closed to terrorism and extremism of any kind,” he said.

As in the battles of the last century, Trump said, “today, the West is also confronted by powers that seek to test our will, undermine our confidence and challenge our interests. We must work together to confront forces, whether they come from inside or out, from the south or the east, that threaten over time to undermine these values and to erase the bonds of culture, faith and tradition that make us who we are.”

The belief that a shared Western culture is under assault in Europe and the U.S. has been one of the underpinnings of the administration’s immigration policies, including Trump’s much-debated temporary ban on travel to the U.S. from six mostly Muslim nations.

Miller and other architects of Trump’s plans argue that high levels of immigration have damaged social cohesion in Europe and threaten to do the same in the U.S.

Trump’s speech, a White House official said, was designed in part to demand from U.S. allies a “commitment not just of money, but of will” to fight Islamic extremism. The official spoke on condition of anonymity to comment on internal discussions.

Trump’s aides see the immigration restrictions they have pushed for as an example of that kind of will. The president and his advisers have pointedly criticized German Chancellor Angela Merkel and other European leaders for not being willing to more sharply restrict the entry of refugees from the Middle East.

Both Bush and Obama feared that casting the fight against terrorism as a battle between the West and Islam would help extremist groups and undermine U.S. allies in the Middle East.

As a candidate, Trump disregarded such concerns, declaring last spring in a televised interview with Anderson Cooper on CNN that “I think Islam hates us.”

The line between the religion and radical ideology is “very hard to define. It’s very hard to separate. Because you don’t know who’s who,” he said then.

Since Trump took office, he has avoided that sort of language. But the approach to Islam has been a topic of sometimes heated debate within the administration.

Shortly before Trump’s trip to the Mideast, his national security adviser, H.R. McMaster, publicly suggested that the president might avoid using the label “radical Islamic terrorism.”

McMaster and his allies succeeded in keeping the term out of Trump’s remarks in Riyadh. As Thursday’s speech showed, however, it has since made a comeback.

(Lauter reported from Washington and Bennett from Warsaw.)