Trump reportedly wants Gallagher, Lorance, or Golsteyn to join him on the 2020 campaign trail 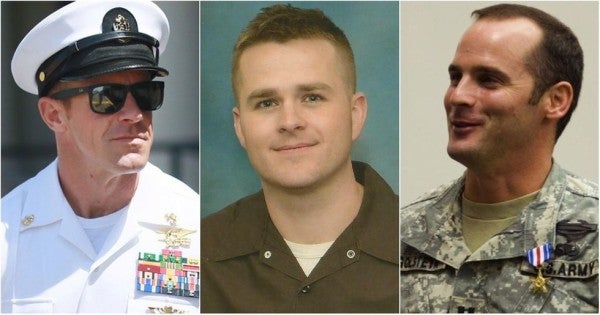 President Donald Trump is considering inviting convicted or accused war criminals join him on the 2020 campaign trail, according to a report from The Daily Beast.

One source told The Daily Beast: “He briefly discussed making it a big deal at the convention.”

On November 15, Trump intervened in these cases of war crimes, granting clemency to Lorance and Golsteyn and reversed the decision to demote Gallagher against the advice of military officials.

“This isn't about these three individuals, it's about the whole military justice system and whether that system itself is something of value to the operations of the military.”

Trump's intervention in Gallagher's case caused recent turmoil and ultimately forced the resignation of Secretary of the Navy Richard Spencer.

The president, as commander-in-chief, has the authority to pardon U.S. service members.

Via a tweet, Trump warned the Navy not to go through with a review board for Gallagher, which would decide if he was fit to retain his title as a Navy SEAL.

The executive decision effectively nixed the peer review ordered by Navy Rear Adm. Collin Green, the head of the Navy SEALs, which set the scene for Spencer's resignation during the weekend.

Spencer described Trump's decision to prevent the Navy's review board as a mistake. According to a previous New York Times report, Spencer and Rear Adm. Green, who oversees the Navy SEALs, threatened to resign if Trump intervened on Gallagher's behalf.

Defense Secretary Mark Esper forced Spencer to resign after he became “deeply troubled” by reports that he circumvented the chain of command by negotiating Gallagher's case directly with the White House.

Some reports claimed that Spencer assured the White House he would allow Gallagher to retain his SEAL designation regardless of the review board's recommendations.

“What message does that send to the troops? That you can get away with things,” Spencer told CBS on Monday after he was ousted.

“We have to have good order and discipline. It's the backbone of what we do, and the Trident review process with the senior enlisted reviewing fellow senior enlisted is critical.”

On Monday, the Navy officially stated that Gallagher's “special designation review” was cancelled. “He will retire from active duty,” according to a statement. “We will not provide additionally details due to privacy concerns.”

Another consideration is the Department of Defense's rule for active-duty service members' political participation.

“Members on active duty may not participate in partisan activities such as soliciting or engaging in partisan fundraiser activities, serving as the sponsor of a partisan club, or speaking before a partisan gathering,” according to the DoD.

“In addition, all military members, including National Guard and Reserve forces, are prohibited from wearing military uniforms at political campaign events.”

Neither the White House nor the Trump campaign responded immediately to further questions from Business Insider.