"Thank you to House Republicans for being tough, smart, and understanding in detail the greatest Witch Hunt in American History." 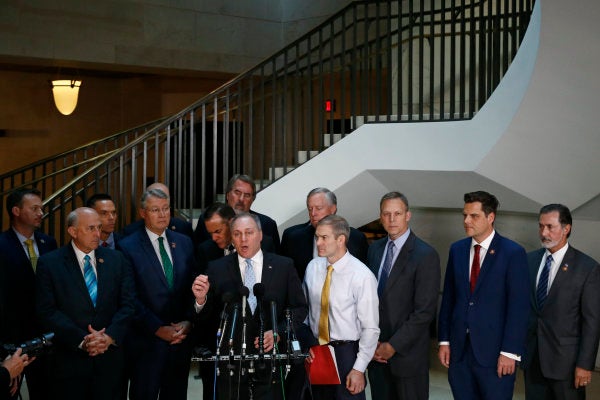 He got what he asked for.

President Trump — who recently urged Republicans to “get tougher” on the impeachment inquiry — praised a group of GOP rebels Thursday for disrupting the probe by storming into a secure hearing room on Capitol Hill and camping out there for a few hours.

“Thank you to House Republicans for being tough, smart, and understanding in detail the greatest Witch Hunt in American History,” the president posted. “It has been going on since long before I even got Elected (the Insurance Policy!). A total Scam!”

Wednesday's Occupy Wall Street-style GOP action violated security protocols, according to Democrats, as many of the roughly two dozen Republicans who barged into the secure room refused to give up their cellphones. Some of them even tweeted from inside the room and were seen live-streaming their protest, which delayed for five hours the deposition of Laura Cooper, a senior Pentagon official in charge of Ukraine policy.

Ardently Trump-loyal Florida Rep. Matt Gaetz spearheaded the anti-impeachment stunt and claimed Democrats are trying to conduct their inquiry in secret in order to control the narrative and hide information.

Despite such complaints from Gaetz and other lawmakers, Republicans are allowed to attend all impeachment inquiry depositions and other hearings as long as they are members of one of the three committees leading the investigation. Gaetz doesn't sit on either of the three.

A source told the Daily News that Trump had been made aware of the Gaetz-led storming beforehand and some reports said the president had even given his blessing to the effort.

The GOP stunt appears to have satisfied Trump's demand earlier this week for a more forceful Republican response to the impeachment inquiry.

House Speaker Nancy Pelosi said the Republican stunt played a part in Trump's “cover-up” of his attempts to pressure Ukraine into investigating Joe Biden and other Democrats.

“The president has been engaged in a cover-up all along,” Pelosi (D-Calif.) said at a Thursday press conference, adding that the CIA whistleblower complaint that sparked the impeachment probe specifically noted that the White House sought to “lock down” all records of Trump's infamous July 25 phone call with Ukrainian President Volodymyr Zelensky.

Impeachment investigators, who are exploring whether Trump abused his office by pushing Ukrainian officials to investigate his political opponents, took a break on Thursday for the laying in state of Maryland Rep. Elijah Cummings, who died at 68 last week.

The probe is expected to pick back up next week with a string of high-profile depositions.

Perhaps most prominent will be the Oct. 31 grilling of Tim Morrison, a senior member of Trump's National Security Council.

Bill Taylor, the top American diplomat in Ukraine, testified Tuesday that Morrison was on a phone call on which Trump officials said the president wouldn't release crucial U.S. security aid to Zelensky unless he committed to investigating Joe Biden and other Democrats before the 2020 election.

Taylor's bombshell testimony has even prompted some Republicans to flinch.

“The picture coming out of it based on the reporting we've seen is, yeah, I would say is not a good one,” South Dakota Sen. John Thune, the second highest-ranking Republican in the Senate, told reporters Wednesday.