Watch Trump Replace A Marine’s Hat Not Once, But Twice, While Leaving The G20 Summit 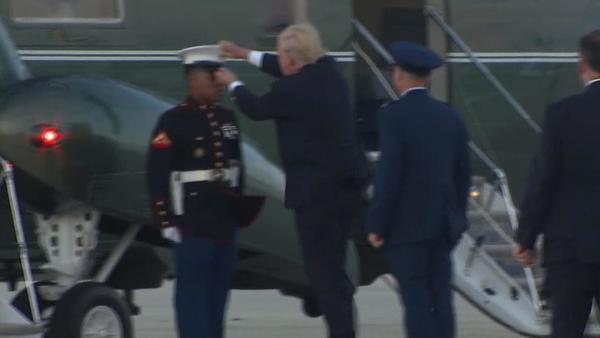 Cameras recording President Donald Trump's exit from the G-20 summit in Hamburg, Germany, caught a light-hearted moment as Trump tried not once, but twice to retrieve a Marine's hat.

As Trump approached the presidential helicopter, Marine One, the strong winds from the rotors blew off the hat of one of the Marines assigned to the president. Trump, apparently amused, clapped as he bent over to pick up the hat, and place it back on the Marine's head. But the wind blew it off again.

HAT'S OFF TO TRUMP! Before boarding Marine One, Trump stops to retrieve a Marine's hat, then this happens… #oopspic.twitter.com/57cW93lTqh