Trump Has Reportedly Floated An Invasion Of Venezuela Multiple Times 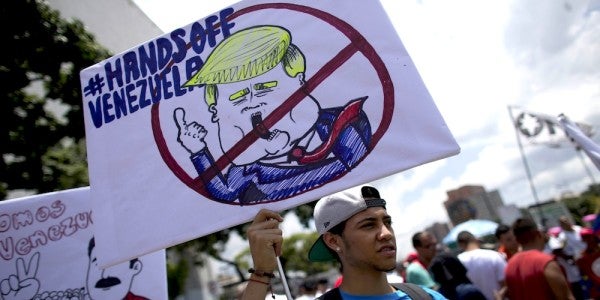 President Donald Trump reportedly floated the idea of invading Venezuela to both senior administration officials and world leaders multiple times in the past year.

According to the Associated Press, Trump first proposed taking over the country to top aides at an August 10 meeting held in the Oval Office to discuss U.S. sanctions on the country.

The backdrop was the South American nation's rapidly deteriorating economy and the perilous state of law and order there.

The previously undisclosed meeting, on which the White House has declined to comment, was anonymously revealed by a senior administration official speaking with the AP.

Trump's suggestion reportedly stunned people at the meeting, including Rex Tillerson and H.R. McMaster, then the secretary of state and the national security adviser.

The AP said those in the room, including McMaster, then spent five minutes taking turns warning Trump how military action could backfire and lose him support among other Latin American governments.

Despite his aides' warnings, Trump reportedly continued to talk of a “military option” to remove Nicolas Maduro as Venezuela's president.

At a private dinner held around a UN General Assembly meeting in New York a month later, the AP said, Trump proceeded to ask the leaders of four Latin American countries whether they would accept military action. The only of the leaders named by the AP was Colombian President Juan Manuel Santos.

Trump reportedly prefaced the conversation with the leaders with the phrase: “My staff told me not to say this.”

He then went around the table to ask the leaders whether they were certain they didn't want the U.S. to invade Venezuela, to which each leader said clearly that they were, the AP reported.

Venezuela's inflation rose above 41,000% last month, making almost all goods unaffordable, and the UN human-rights office declared a breakdown of law and order in the country, citing reports that security forces had killed hundreds of anti-government demonstrators while protecting some suspected of criminal activity from prosecution.

Venezuelans have also been fleeing to countries including Brazil, Colombia, Chile, the United States and Spain.

Trump said publicly in August that a military option was not out of the question for dealing with the Venezuelan crisis, but details of the president's seriousness about the issue had not been reported until Wednesday.

His administration levied new sanctions on dozens of Venezuelan officials, including Maduro, in May.

Trump's bullish stance against Venezuela could actually bolster Maduro's standing at home, however, as Maduro's supporters have long lamented Washington's involvement in domestic affairs and used anti-U.S. sentiment to unite against his opponents.