In his sanctions announcement, Trump accidentally named the wrong supreme leader of Iran, who has been dead since 1989

President Donald Trump on Monday mistakenly named a supreme leader of Iran who has been dead since 1989 as the target of new U.S. sanctions 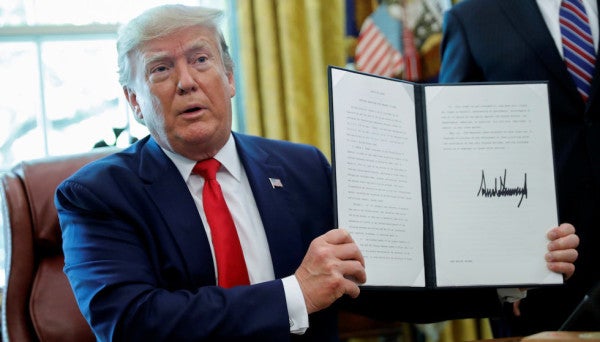 President Donald Trump on Monday mistakenly named a supreme leader of Iran who has been dead since 1989 as the target of new U.S. sanctions.

By mispronouncing one syllable in a press conference in the Oval Office, Trump said he was sanctioning “Ayatollah Khomeini” of Iran.

He meant to name Ayatollah Ali Khamenei, the current supreme leader, as confirmed by a
White House transcript and an announcement by the U.S. Treasury.

Khomeini ruled Iran as supreme leader from the Islamic Revolution in 1979 until his death in 1989.

In a video, Trump said (emphasis ours):

“Sanctions imposed through the executive order that I'm about to sign will deny the supreme leader and the supreme leader's office, and those closely affiliated with him and the office, access to key financial resources and support. The assets of Ayatollah Khomeini and his office will not be spared from the sanctions.”

The one-syllable difference is somewhat less apparent when comparing the men's full names: Sayyid Ruhollah Musavi Khomeini was the first ayatollah, and Sayyid Ali Hosseini Khamenei is the second.

On Twitter, critics were quick to question the discrepancy.

Ayatollah Khomeini on his way to deliver a statement on his recent sanctions designation pic.twitter.com/wfAenWyc3L

Trump says Ayatollah Khomeini, 30 years dead, will not be spared from the sanctions. Sanctions overreach into the afterlife: https://t.co/iVvstQIk0G

Ayatollah Khomeini is trending because Trump is a moron. Helluva time to be alive. I look forward to the missile strikes against the Iron Sheik. He will retaliate with the Camel Clutch offensive.

The sanctions imposed Monday came amid escalating tensions between Iran and the US, with Trump ordering and then calling off airstrikes last week against Iran after it downed a US drone.

In a Tuesday speech broadcast live on Iranian TV, Hassan Rouhani, the president of Iran, said the Trump White House had “mental retardation.”