President Donald Trump is reportedly considering former presidential candidate Jim Webb to take over the reins of the Pentagon, according to The New York Times. 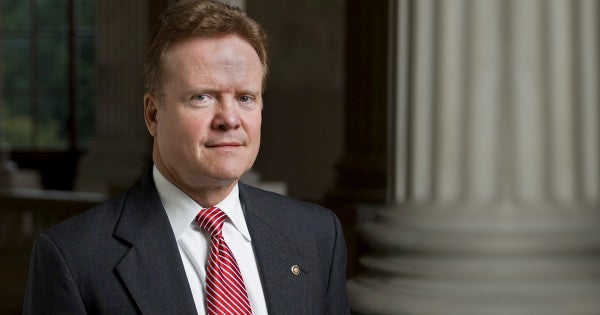 President Donald Trump is reportedly considering former presidential candidate Jim Webb to take over the reins of the Pentagon, according to The New York Times.

Webb, 72, most recently ran for the Democratic nomination for president in 2016. He previously served as a Senator from Virginia from 2007 to 2013 and was Secretary of the Navy and an Assistant Secretary of Defense during the Reagan administration.

Trump administration officials have privately reached out to Webb, according to three sources who spoke to the Times on condition of anonymity. Although a member of the Democratic party, Webb's views align more closely with Trump's push to remove troops from the Middle East to confront a rising China, according to the Times.

If picked, Webb would replace acting Defense Secretary Patrick Shanahan, who took over the role for former Secretary Jim Mattis, who resigned in protest last month. Webb would likely face some opposition over past comments about women serving in the military, which have come up repeatedly during his political career.

He previously told The Washington Post that he wrote the 1979 article, titled Women Can't Fight, during “an intense national debate regarding women serving in combat” and apologized, saying that “clearly, if I had been a more mature individual, there are things that I would not have said in that magazine article. To the extent that this article subjected women at the Academy or the armed forces to undue hardship, I remain profoundly sorry.”

Born in St. Louis, Missouri, Webb graduated from the Naval Academy in 1968 and later served in Vietnam, where he was wounded twice and received the Navy Cross for combat heroism. During a firefight with enemy soldiers in 1969, Webb “simultaneously fired his weapon at the enemy” who threw a grenade at his men, and pushed one Marine away from the blast while shielding him from the explosion with his own body.

The heroic action came up during the 2016 Democratic primary debates, earning Webb some internet meme fame after he quipped about the enemy who “is not around right now to talk to.”

Read the full story at The Times >