Trump Doubles Down On Criticism Of Obama Over Gold Star Families

President Donald Trump on Oct. 17 seemed to double down on his claim that President Barack Obama didn't call the... 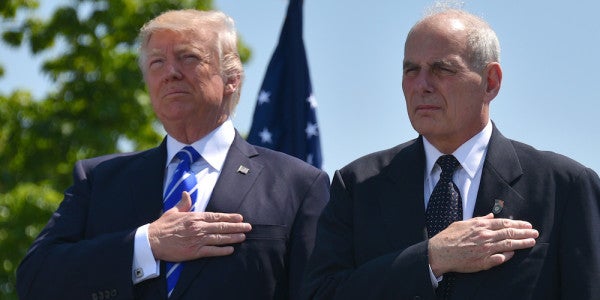 President Donald Trump on Oct. 17 seemed to double down on his claim that President Barack Obama didn't call the families of American service members killed in combat, known as Gold Star families.

“You can ask General Kelly. Did he get a call from Obama?” Trump told “Fox & Friends” host Brian Kilmeade during an interview, presumably referring to White House chief of staff John Kelly's son who was killed in Afghanistan in 2010.

“I don't know what Obama's policy was,” Trump told Kilmeade. “I write letters, and I also call.”

Trump first suggested during a press conference on Oct. 16 that Obama did not call Gold Star families when he was president. Trump was responding to a reporter who asked about the four American soldiers killed in a raid in Niger earlier this month.

“President Obama and other presidents, most of them didn't make calls,” Trump said, adding: “I like to call when it's appropriate.”

Obama hosted a White House breakfast on Memorial Day in 2011 for Gold Star families. A source familiar with the breakfast told Business Insider that Kelly was seated at the table with First Lady Michelle Obama.

Some on the right who said Obama didn't have the stomach for war criticized him when he took pains to honor wounded or fallen service members and their families as president.

“A president has to be psychologically prepared to send people into harm's way and to get a good night's sleep,” Eliot Cohen, an official under President George W. Bush, told The New York Times in 2016. “And anything they do that might cripple them that way means they're not doing their job.”

Trump has faced criticism for his treatment of Gold Star families. In 2016, he repeatedly went after Khizr and Ghazala Khan, the parents of a soldier killed in Iraq.

In a series of interviews last year, Trump questioned whether Ghazala Khan, who stood onstage beside her husband during his speech at the Democratic National Convention, was permitted to speak — a remark that some saw as a criticism of the family's Muslim faith.