Trump Chief Of Staff John Kelly: ‘Best Job I Ever Had Was As A Sergeant In The Marine Corps’ 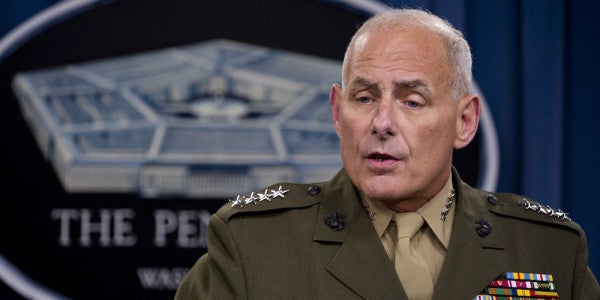 During a social dinner at President Donald Trump's clubhouse restaurant in Bedminster, New Jersey, late last week, White House chief of staff John Kelly reportedly joked that his storied career in the Marine Corps paled in comparison to the politics at the White House.

Kelly was tapped for the chief of staff post two weeks ago, after serving as Homeland Security secretary, and has been on the frontlines of an embattled Trump administration as it continues to face criticism over its response to the violent protests in Charlottesville, Virginia, last weekend.

Kelly, who has served for more than 40 years in the Marine Corps, originally enlisted in 1970 as an infantryman. He was discharged as a sergeant in 1972.

“I wasn't committed to a career, but I wanted to go to college and come back and be an officer,” Kelly said in a previous Defense Media Activity report.

After graduating college, Kelly commissioned as a second lieutenant, where he became a “mustang” — a moniker for service members who become officers after having the experience of carrying out their duties as an enlisted service member. Kelly eventually rose to the rank of a four-star general, commanding U.S. Southern Command and the Marine Forces Reserve.

“One of the worst things about getting promoted as an officer is that you get further and further away from day-to-day contact with young Marines,” Kelly said.