Flanked By Stealth Jets, Trump Vowed Confidence In US ‘Options’ For North Korea

Editor’s Note: This article by Brendan McGarry originally appeared on Military.com, the premier source of information for the military and veteran... 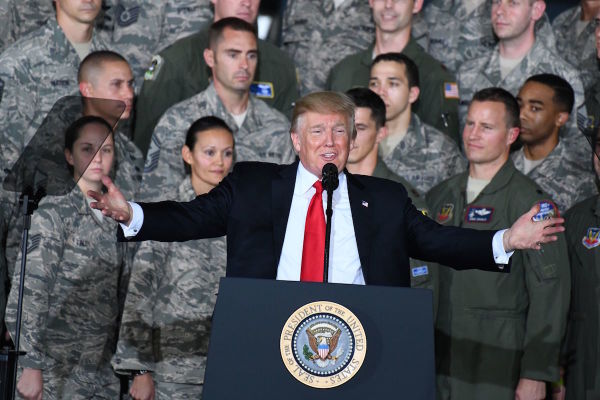 President Donald Trump on Friday stood before the U.S. Air Force's most advanced stealth aircraft and vowed confidence in the country's ability to respond to North Korean threats.

Speaking at Joint Base Andrews outside Washington, D.C., at an event marking the service's 70th anniversary, the president said the regime of Kim Jong-un, in launching another intermediate-range ballistic missile over Japan, has shown “utter contempt for its neighbors and for the entire world community.”

To a crowd of largely military personnel, Trump said, “After seeing your capabilities and commitment here today, I am more confident than ever that our options in addressing this threat are both effective and overwhelming.”

Earlier in the day, National Security Adviser Army Lt. Gen. H.R. McMaster and U.S. Ambassador to the United Nations Nikki Haley during a briefing with reporters at the White House responded to North Korea's longest-ever test flight of a ballistic missile.

“What's different about this approach is that we're out of time,” McMaster said. “We've been kicking the can down the road and we're out of road. … There is a military option. Now, it's not what we prefer to do.”

Neither Trump nor McMaster described what a military response would look like. The risks for such action have heightened since North Korea this month claimed to have detonated a hydrogen bomb, or thermonuclear weapon, for the first time.

During the ceremony at Andrews, which hosts an airshow this weekend, the president stood in front of airmen, as well as three aircraft: the F-35 Joint Strike Fighter, the B-2 Spirit bomber and the F-22 Raptor fighter jet.

Trump said he spoke to British Prime Minister Theresa May about Friday's suspected terrorist attack in London, in which a bucket caught fire on a packed London subway train and sent commuters fleeing in panic.

The attempted bombing was the fifth and latest terrorist attack in England this year — incidents that have left three dozen people dead, CNN reported.

Trump said during the call he underscored America's “absolute commitment to eradicating the terrorists from our planet. Radical Islamic terrorism, it will be eradicated. Believe me.”

The commander-in-chief also thanked the Air Force for participating in relief efforts this month in the wake of hurricanes Harvey in Texas and Irma in Florida, and he singled out the few hundred medical personnel who flew into the Sunshine State to care for residents impacted by the storm.

The president took time to honor the service's history and abilities.

“For seven decades, the United States Air Force has pushed the boundaries of science and technology, helped restore peace and stability to trouble land, and kept America safe from those who threaten our very way of life,” he said.

“Nothing inspires more confidence in our friends or strikes more fear in the hearts of our enemies than the sight of American warplanes on the horizon,” he said. “You patrol the sky, protect the homeland and deliver American justice to anyone who dares to threaten our people, from the earliest wooden biplanes, to the high-tech , to the awesome power and stunning beauty of the F-35, the B-2, F-22, and I saw a lot of them today — the F-15, F-16, F-18 — I don't know which one I like the best.”

Trump said, “Now, when our enemies hear the F-35 engines, when they're roaring overhead, their souls will tremble, and they'll know a day of reckoning is alive. That is the way it's been since the Air Force was born in 1947.”

“His place in the pages of history might have seemed unlikely prior to that fateful mission — he had never seen the ocean before,” Trump said. “He knew what his country needed and what his duty required.”

The president closed his remarks, saying, “I am always on your wing. Happy 70th birthday to the United States Air Force.”