President Donald Trump approved a plan to check Beijing over its continued militarization of and actions in the South China... 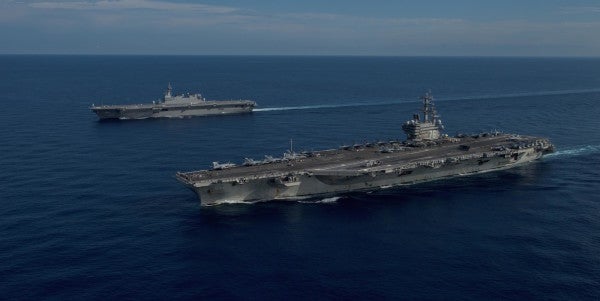 President Donald Trump approved a plan to check Beijing over its continued militarization of and actions in the South China Sea, Breitbart News Kristina Wong reports.

Over the last few years, China has ambitiously built up islands on reefs and atolls in the South China Sea and militarized them with radar outposts, military-grade runways, and shelters for missile defenses.

Military analysts believe China hopes to expand its air defense and identification zone into the western Pacific and build a blue-water navy to rival the US's, but six other countries also lay claim to parts of the region.

In 2016, an international court at The Hague deemed China's maritime claims unlawful and excessive, but China rejected the ruling outright and has continued to build military installations and unilaterally declare no-fly and no-sail zones.

When a country makes an excessive naval claim, the US Navy challenges it by sailing its ships, usually destroyers, close to the disputed territory or through the disputed waters as a way of ensuring freedom of navigation for all. In 2016, the US challenged the excessive claims of 22 nations — China's claims in the South China Sea, through which $5 trillion in annual shipping passes, were the most prominent.

China has responded forcefully to US incursions into the region, telling the US the moves were provocative and that they must ask permission, which doesn't align with international law or UN conventions.

“China's military will resolutely safeguard national sovereignty, security and regional peace and stability,” China's Foreign Ministry said in response to US bombers flying in the region.

Under former US President Barack Obama, the US suspended freedom of navigation operations in the South China Sea from 2012 to 2015. In 2016, the US made just three such challenges. So far, under Trump, the US has made three challenges already.

“This administration has definitely given the authority back to the people who are in the best position to execute those authorities, so it’s a return to normal,” she said.

Freedom of navigation operations work best when they're routine in nature and don't make news.

They serve to help the US establish the facts in the water, but in the South China Sea, those facts all indicate Chinese control.

When Chinese military jets fly armed over head, when Chinese navy ships patrol the waters, and when Chinese construction crews lay down the framework for a network of military bases in the South China Sea, the US's allies in the region notice.

An increased US Navy presence in the area won't turn back time and unpave runways, but it could send a message to allies that the US has their back and won't back away from checking Beijing.