Trump Just Called For A Review Of US Military Preparedness

President Donald Trump has instructed the Pentagon to carry out a top-to-bottom review of the nation’s military, and draw up... 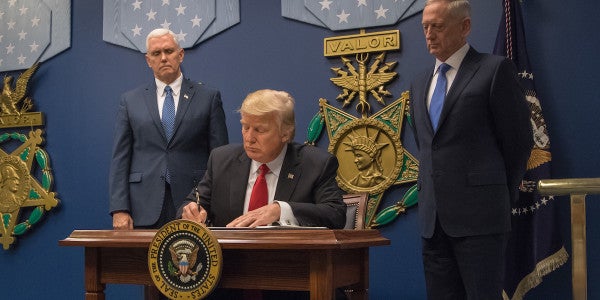 President Donald Trump has instructed the Pentagon to carry out a top-to-bottom review of the nation’s military, and draw up plans to upgrade equipment, improve training, and address current and future threats with an increased budget.

The executive action, signed Friday during President Donald Trump’s first visit to the Pentagon, follows through on a campaign pledge to build up the military, which Trump says was ignored under the Obama administration.

“I’m signing an executive action to begin a great rebuilding of the armed services of the United States, developing a plan for new planes, new ships, new resources and new tools for our men and women in uniform,” he said in a brief address to a crowd made up of civilians and uniformed service members.

“Our military strength will be questioned by no one,” he said. “Neither will our dedication to peace.”

The executive action is vaguely worded and appears more symbolic than substantive. Defense Secretary James N. Mattis is to conduct a “readiness review” within 30 days that will assess military needs.

The order calls for the Pentagon to work with the Office of Management and Budget on a “budget amendment for military readiness, including any proposed reallocations” for this year.

It is an unsurprising move by Trump, who as a candidate vowed to boost Pentagon spending for more soldiers, ships and aircraft, and called for a new strategy for cyberdefense.

Mackenzie Eaglen, a defense analyst at the American Enterprise Institute, said the changes could add up to $300 billion over the next four years. The Pentagon’s budget request for fiscal 2017 is around $584 billion.

During Trump’s trip, Vice President Mike Pence conducted a ceremonial swearing-in of Mattis, whose first day on the job was Saturday.

Trump met with Mattis, Marine Gen. Joseph F. Dunford Jr., chairman of the Joint Chiefs of Staff, and the chiefs of all the military branches in a Pentagon conference room. The hourlong discussion centered on Islamic State, but also involved the range of worldwide challenges the U.S. military faces in the years ahead.

The president has yet to define what his policy is toward today’s major issues: battling Islamic State in Iraq and Syria, a renewed insurgency in Afghanistan, Russian aggression in Ukraine and a growing Chinese presence in the South China Sea.