With more than two weeks until Donald Trump’s inauguration, it remains unclear when the president-elect will select his Department of... 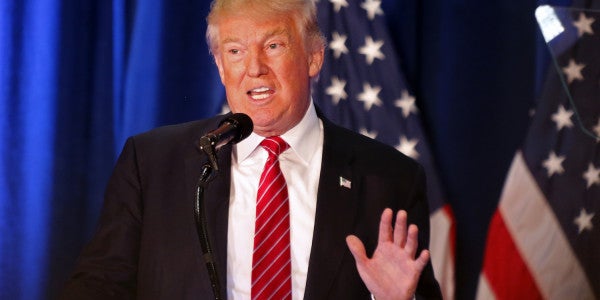 With more than two weeks until Donald Trump’s inauguration, it remains unclear when the president-elect will select his Department of Veterans Affairs secretary, as names are dropped and added to the list of candidates.

In a daily briefing with news reporters, Trump spokesman Sean Spicer said Tuesday that selections for the remaining Cabinet posts and other staffing decisions would be announced “when [Trump] has made his mind up.”

As of Tuesday, Trump had nominated people for all Cabinet-level posts besides VA Secretary and Secretary of Agriculture. Trump spokespersons said last month that the president-elect was taking his time to find someone to reform the beleaguered agency.

Related: How Donald Trump Won The White House And Stunned The World »

In addition to Mackay, Cosgrove and Quinonez, Trump has met with Navy Adm. Michelle Howard and retired Coast Guard Adm. Thad Allen about the VA post. Early on, frontrunners were Sen. Scott Brown, R-Mass., who retired from the Army National Guard, and Pete Hegseth, a Fox News contributor, Iraq War veteran and former CEO of conservative-leaning Concerned Veterans for America.

Also speculated for the post is Jeff Miller, former Republican representative from Florida and chairman of the House Committee on Veterans’ Affairs. Trump said during his campaign that he would consider Miller for the position, but he has not met with Miller in recent weeks.

Mackay, who met with Trump and Pence in New York on Tuesday, served as deputy secretary and chief operation officer of the VA from 2001 to 2003, during President George W. Bush’s first term. He was second-in-command to Anthony Principi, VA Secretary at the time, until resigning to take a position with ACS State Healthcare in Atlanta.

Mackay is a graduate of the U.S. Naval Academy and Harvard University. He’s a former F-14 pilot and veteran of Operation Earnest Will, when the United States protected oil tankers from Iranian attacks in the late 1980s. He has previously served as an assistant in the Secretary of Defense’s office and as chairman of an advisory committee on minority health with the Department of Health and Human Services.

At Lockheed Martin, he oversees the company’s ethics program.

Cosgrove, a Vietnam War veteran, had emerged as a favorite before deciding to withdraw because of other responsibilities. He leads a $6.2 billion health care system comprising of the Cleveland Clinic in Cleveland and other community hospitals and family health and surgical centers.

“He was honored to be considered, but decided that he still has significant obligations here at Cleveland Clinic that he is not able to walk away from at this time,” Cleveland Clinic spokesman Eileen Sheil said. “This was a very difficult decision for him that he did not take lightly.”

This is the second time that Cosgrove has turned down the opportunity to lead the VA.

President Barack Obama sought to appoint Cosgrove as VA Secretary in 2014, when former VA Secretary Eric Shinseki resigned amid a scandal of veterans waiting long periods for care at VA facilities and managers manipulating data that tracked the wait times. According to news accounts, Cosgrove turned down the post.

Quinonez, who served on Trump’s Hispanic Advisory Council, withdrew from consideration Saturday, citing a recent battle with cancer as a factor, according to news reports.

Leaders with some of the largest veterans organizations told Trump’s transition team in early December that they would rather retain VA Secretary Bob McDonald than replace him with other, rumored candidates. At the time, the two most talked about were Brown and Hegseth.

When Hegseth was shown arriving at Trump Tower to meet with the president-elect, some veteran leaders recoiled at his involvement.

Concerned Veterans for America is an advocacy group that has become more prominent recently, as Trump has tapped its members as advisers. Besides meeting with Hegseth, at least two members of Trump’s transition team are linked to the group, which has financial ties to billionaires Charles and David Koch.

CVA has said it wants veterans’ options for health care to further expand into the private market. Other veterans groups have expressed concern that paying for more outside care could erode VA resources.

“We think Hegseth would be a poor choice because he’s never run anything,” said Rick Weidman of Vietnam Veterans of America. “Frankly, I don’t think he even understands a lot of what the VA does.”

Joe Chenelly, director of AMVETS, said the VA needs a secretary with a “deeper understanding of what the VA is.”

But transition officials have dismissed the idea of keeping Obama’s choice, a move that wouldn’t jive with Trump’s campaign message.

When Trump laid out his 10-point plan in July for fixing the VA, he called McDonald a “political hack,” Stars and Stripes reported at the time. Trump has called the VA the “most corrupt” and “most incompetently run” federal agency.

The next VA secretary will be responsible for transforming the second-largest federal agency behind the Department of Defense.

According to the Office of Personnel Management, the VA had nearly 340,000 employees as of 2013, and it operates on an annual budget of approximately $180 billion. It’s the country’s largest health care system, with 152 medical centers and approximately 800 outpatient clinics.

After Trump nominates a VA secretary, the person must go through a Senate confirmation hearing before the nomination goes to the Senate floor for consideration. Nominees can’t be confirmed until Trump takes office.