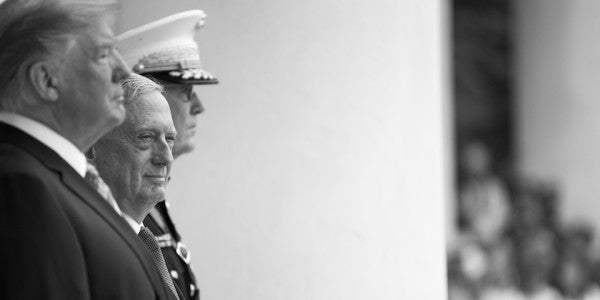 This request comes just months after Trump asked every major cabinet agency to submit proposals cutting their budget by 5% next year, according to The Washington Post. Trump said he wanted to see the defense budget decrease by 2%, from $716 billion to $700 billion.

In November 2018, those two chairmen, James Inhofe, and Mac Thornberry, published an op-ed in The Wall Street Journal urging the President not to cut military spending. “Any cut in the defense budget would be a senseless step backward,” they wrote. “The Pentagon would be forced to cut in areas where the most money can be saved quickly — troops, new equipment, training, and maintenance—as it did under sequestration in 2013.”

Trump has appeared to vacillate between advocating for increasing and decreasing military spending. Bumping up defense spending was a big part of his presidential campaign, CNN reported. When he signed the $716 billion 2019 defense budget, he called it “the most significant investment in our military in our warfighters in modern history.”

And according to The Washington Post, Trump has threatened to shut down the government if he doesn't get at least $5 billion for the construction of a border wall.

On Monday, however, Trump tweeted: “I am certain that, at some time in the future, President Xi and I, together with President Putin of Russia, will start talking about a meaningful halt to what has become a major and uncontrollable Arms Race. The U.S. spent 716 Billion Dollars this year. Crazy!”

Politico reported that the $750 billion number isn't official yet, and should be announced this week.

The defense budget includes the Pentagon and Department of Energy funding for the U.S. nuclear arsenal, Politico reported. However, defense funding is still subject to the Budget Control Act spending caps, so this increase wouldn't be put into action until lawmakers agreed to a deal to lift the caps.