On the day that their talks in Hanoi collapsed last month, U.S. President Donald Trump handed North Korean leader Kim Jong Un a piece of paper that included a blunt call for the transfer of Pyongyang's nuclear weapons and bomb fuel to the United States 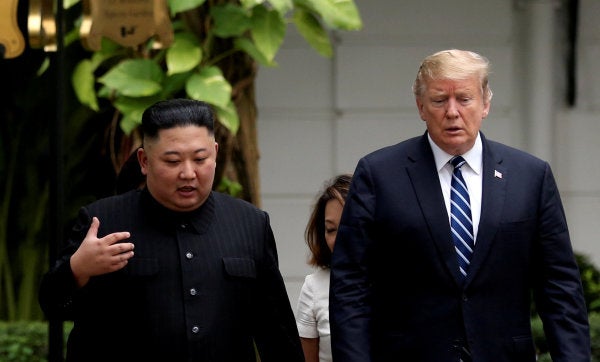 WASHINGTON (Reuters) – On the day that their talks in Hanoi collapsed last month, U.S. President Donald Trump handed North Korean leader Kim Jong Un a piece of paper that included a blunt call for the transfer of Pyongyang's nuclear weapons and bomb fuel to the United States, according to the document seen by Reuters.

Trump gave Kim both Korean and English-language versions of the U.S. position at Hanoi's Metropole hotel on Feb. 28, according to a source familiar with the discussions, speaking on condition of anonymity. It was the first time that Trump himself had explicitly defined what he meant by denuclearization directly to Kim, the source said.

A lunch between the two leaders was canceled the same day. While neither side has presented a complete account of why the summit collapsed, the document may help explain it.

The document's existence was first mentioned by White House national security adviser John Bolton in television interviews he gave after the two-day summit. Bolton did not disclose in those interviews the pivotal U.S. expectation contained in the document that North Korea should transfer its nuclear weapons and fissile material to the United States.

The document appeared to represent Bolton's long-held and hardline “Libya model” of denuclearization that North Korea has rejected repeatedly. It probably would have been seen by Kim as insulting and provocative, analysts said.

Trump had previously distanced himself in public comments from Bolton's approach and said a “Libya model” would be employed only if a deal could not be reached.

The idea of North Korea handing over its weapons was first proposed by Bolton in 2004. He revived the proposal last year when Trump named him as national security adviser.

The document was meant to provide the North Koreans with a clear and concise definition of what the United States meant by “final, fully verifiable, denuclearization,” the source familiar with discussions said.

The White House did not immediately respond to a request for comment. The State Department declined to comment on what would be a classified document.

After the summit, a North Korean official accused Bolton and Secretary of State Mike Pompeo of “gangster-like” demands, saying Pyongyang was considering suspending talks with the United States and may rethink its self-imposed ban on missile and nuclear tests.

Aside from the call for the transfer of Pyongyang's nuclear weapons and bomb fuel, the document had four other key points.

It called on North Korea to provide a comprehensive declaration of its nuclear program and full access to U.S. and international inspectors; to halt all related activities and construction of any new facilities; to eliminate all nuclear infrastructure; and to transition all nuclear program scientists and technicians to commercial activities.

The summit in Vietnam's capital was cut short after Trump and Kim failed to reach a deal on the extent of economic sanctions relief for North Korea in exchange for its steps to give up its nuclear program.

The first summit between Trump and Kim, which took place in Singapore in June 2018, was almost called off after the North Koreans rejected Bolton's repeated demands for it to follow a denuclearization model under which components of Libya's nuclear program were shipped to the United States in 2004.

Seven years after a denuclearization agreement was reached between the United States and Libya's leader, Muammar Gaddafi, the United States took part in a NATO-led military operation against his government and he was overthrown by rebels and killed.

After North Korea threatened to cancel the Singapore summit, Trump said in May 2018 he was not pursuing a “Libya model” and that he was looking for an agreement that would protect Kim.

“The Libya model was a much different model. We decimated that country,” Trump added.

The Hanoi document was presented in what U.S. officials have said was an attempt by Trump to secure a “big deal” under which all sanctions would be lifted if North Korea gave up all of its weapons.

U.S.-North Korean engagement has appeared to be in limbo since the Hanoi meeting. Pompeo said on March 4 he was hopeful he could send a team to North Korea “in the next couple of weeks,” but there has been no sign of that.

Jenny Town, a North Korea expert at the Washington-based Stimson Center think tank, said the content of the U.S. document was not surprising.

“This is what Bolton wanted from the beginning and it clearly wasn't going to work,” Town said. “If the U.S. was really serious about negotiations they would have learned already that this wasn't an approach they could take.”

Town added, “It's already been rejected more than once, and to keep bringing it up … would be rather insulting. It's a non-starter and reflects absolutely no learning curve in the process.”

North Korea has repeatedly rejected unilateral disarmament and argues that its weapons program is needed for defense, a belief reinforced by the fate Gaddafi and others.

In an interview with ABC's “This Week” program after the Hanoi summit, Bolton said the North Koreans had committed to denuclearization in a variety of forms several times “that they have happily violated.”

“We define denuclearization as meaning the elimination of their nuclear weapons program, their uranium enrichment capability, their plutonium reprocessing capability,” Bolton said.

Asked who authored the document, Bolton said it had been “written at staff level and cleared around as usual.”

(Reporting by Lesley Wroughton and David Brunnstrom; Editing by Mary Milliken and Will Dunham)