President Donald Trump on Wednesday defended his decision to abandon the Kurds to a Turkish military incursion in Syria by saying they didn't help the US during World War II. 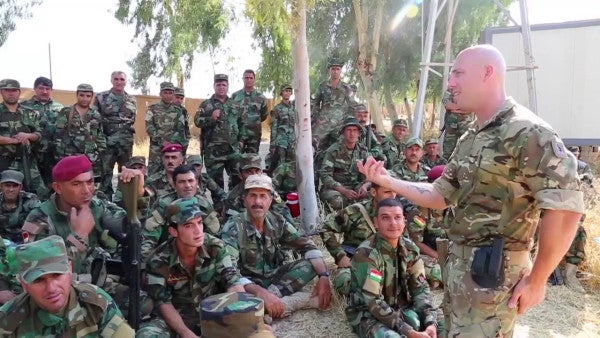 President Donald Trump on Wednesday defended his decision to abandon the Kurds to a Turkish military incursion in Syria by saying they didn't help the US during World War II.

This came amid reports Turkish ground troops were crossing the border into Syria following airstrikes that began earlier in the day.

Goes on to say the Kurds are only interested in fighting for "their land" before adding: "With all that being said, we like the Kurds." pic.twitter.com/hOg37hf0N8

The Trump administration on Sunday abruptly announced the US was withdrawing troops stationed in northeast Syria ahead of a Turkish operation. The move has been broadly condemned in Washington, including by top congressional Republicans and former Trump administration officials, as many feel Trump paved the way for Turkey to go after key US allies.

The Kurdish-led Syrian Democratic Forces (SDF) bore the brunt of the US-led campaign against ISIS, losing roughly 11,000 fighters in the process.

On Wednesday, when asked by reporters whether he felt the Syria retreat and treatment of the Kurds sent a poor message to other potential US allies, Trump said, “Alliances are very easy.” The president said it “won't be” hard for the US to form new partnerships.

The Kurdish forces had recently dismantled defensive positions along the Turkey-Syria border under assurances from the US it would not allow a Turkish assault.

But the White House late on Sunday made the announcement it was pulling out of northeast Syria,which signaled Turkey was set to move foward with a military operation and that the US would not prevent it. This came after a call between between Trump and Turkish President Recep Tayyip Erdogan.

The SDF described the development as a “stab in the back” and made clear it felt betrayed by the US.

A number of congressional lawmakers and former US officials have also expressed concerns about the message sent to allies or future partners by the Trump administration's Syria retreat.

Trump's former top envoy in the fight against ISIS, Brett McGurk, was particularly critical of the president.

McGurk in a tweet on Monday said, “Donald Trump is not a Commander-in-Chief. He makes impulsive decisions with no knowledge or deliberation. He sends military personnel into harm's way with no backing. He blusters and then leaves our allies exposed when adversaries call his bluff or he confronts a hard phone call.”

Similarly, Republican Sen. Lindsey Graham of South Carolina, a key ally for Trump in Congress who sits on the Senate Foreign Relations Committee, on Monday tweeted, “By abandoning the Kurds we have sent the most dangerous signal possible — America is an unreliable ally and it's just a matter of time before China, Russia, Iran, and North Korea act out in dangerous ways.”

'This attack will spill the blood of thousands of innocent civilians'

The Kurds and Turkey have been at odds for years, and the dominant fighting force in the SDF, the Syrian Kurdish People's Protection Units (YPG), is viewed by the Turkish government as a terrorist affiliate due to its ties to he Kurdistan Workers' Party (PKK). The PKK for years has waged a violent campaign against the Turkish government as part of a broader effort to establish an independent Kurdish state within Turkey.

In tweets announcing the onset of Turkey's military incursion into Syria on Wednesday, Erdogan said the operation's goal was to “neutralize terror threats against Turkey and lead to the establishment of a safe zone, facilitating the return of Syrian refugees to their homes.”

“Our mission is to prevent the creation of a terror corridor across our southern border, and to bring peace to the area,” Erdogan said.

Meanwhile, the SDF has pleaded for the US and its allies to establish a no-fly zone in the region and to “carry out their responsibilities to avoid a possible impending humanitarian disaster.”

“This attack will spill the blood of thousands of innocent civilians because our border areas are overcrowded,” the SDF's official Twitter account said.