Trump is purging the Pentagon of perceived enemies and installing loyalists in their place, critics say 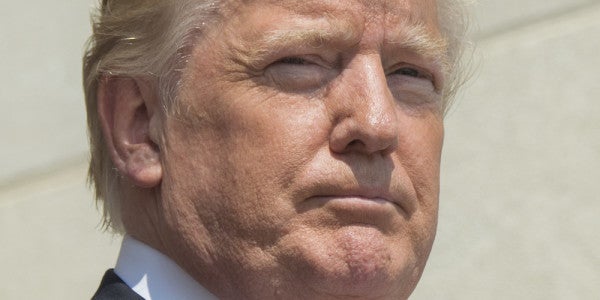 President Donald Trump has always prized loyalty in his subordinates, but news about pending personnel moves at the Pentagon could indicate the president is determined to root out perceived enemies within the Defense Department.

Jonathan Swan of Axios first reported in February that the White House had compiled a list of civil servants across the government who should be dismissed because they allegedly had not been loyal enough to the president. The ousted government officials will reportedly be replaced by people who are more ardently pro-Trump.

Since then, it has emerged that Trump intends to nominate retired Army Brig. Gen. Anthony Tata, a Fox News contributor, to fill the No. 3 leadership position in the Pentagon. Tata left the Army after an investigation found he had affairs with at least two women while serving in uniform, the Raleigh News & Observer reported. More recently, Tata has lauded Trump for his support of Navy SEAL Eddie Gallagher.

Tata is already serving as a senior advisor to Defense Secretary Mark Esper, a defense official confirmed following a May 15 news story by Foreign Policy’s Jack Detsch and Robbie Gramer.

The two Foreign Policy reporters also first revealed that Michael Cutrone will move from Vice President Mike Pence’s office to the Pentagon, raising concern from some administration officials that Cutrone will undermine Esper by vetting political appointees to the Defense Department based on how loyal they are to Trump.

Peter Singer, of the New America think tank in Washington, said he has doubts that either Tata or Cutrone are qualified for senior leadership roles in the Pentagon and he doubts they would have been appointed to the Defense Department under previous administrations, both Republican and Democrat.

“I don't think I am out on a limb saying neither would be the 1st, 2nd, or 23rd choice for those roles in a Reagan, Bush 1 or 2 administration,” Singer told Task & Purpose.

However, Singer said he does not believe the two appointments would undermine Esper, who has already shown that he is more than willing to comply with the White House.

“Whether it is on delayed preparation for coronavirus, so as not to get ahead of Trump's downplaying of it, taking millions from DoD Russia deterrence funds to pay for a wall, or military justice system interference, Esper has generally gone with the flow,” said Singer, who served on President Barack Obama's 2008 campaign.

Tata did not respond to multiple requests for comment. When asked about personnel moves at the Pentagon, the White House insisted there is nothing untoward Cutrone's his pending appointment.

While the recent personnel moves may signal a more aggressive push by the president to exert direct control over the Pentagon, the White House has been deeply involved in selecting officials for defense jobs since the beginning of the Trump administration.

But since the Senate acquitted Trump in February of allegedly withholding $250 million of military aid to Ukraine in an attempt to get that country's government to investigate former Vice President Joe Biden, the president has been particularly vindictive against defense officials over any sign of disloyalty — real or perceived.

If confirmed by the Senate, Tata would replace John Rood, who was fired in February. Rood had certified in May 2019 that Ukraine had made enough progress fighting corruption to allow for the military assistance package to go through, thus undermining Trump's arguments about why he withheld the aid.

Trump has also withdrawn Elaine McCusker’s nomination to be the Pentagon’s comptroller. McCusker had reportedly raised concerns with the Office of Management and Budget about whether the president’s freeze of military aid to Ukraine was legal.

Likewise, The White House removed Army Lt. Col. Alexander Vindman from the National Security Council in February. During the president’s impeachment inquiry in November, Vindman told lawmakers there was “no ambiguity” that Trump had asked Ukraine’s president to investigate former Biden during the July 25 phone call between the two leaders.

The president is retaliating against defense officials who argued in favor of providing the military aid Ukraine and anyone who stood up to Trump himself, said Evelyn Farkas, a former Defense Department official in the Obama administration whose purview included Russian and Ukraine.

“I don’t think the president minds that we know this,” said, Farkas, who is running for Congress in New York as a Democrat. “I think that he’s trying to send a signal internally and externally: don’t cross him.”

Farkas said she is also concerned that Trump is appointing people to the Defense Department based on loyalty rather than competence. For example, Tata is expected to be nominated to become the undersecretary of defense for policy, a job not typically held by a retired general officer due to concerns about civil-military relations.

The job also requires a deep understanding on a variety of issues, including nuclear weapons, biological warfare, and regional tensions, Farkas said, adding that Tata’s major qualification is that he’s proven himself a Trump loyalist through his appearances on Fox News.

“People are not being picked here based on their deep expertise, based on their experience, and their judgment,” Farkas sad. “They are being picked here based on the loyalty they have already demonstrated to the president and the president is satisfied they will do whatever it is he decides, whether or not it’s in the best interest of the United States of America or the men and women in the military or the civilian service of the Department of Defense.”

All the president's appointees

Not everyone believes the personnel moves at the Pentagon are egregious or unusual.

President Trump has the right to expect that the people who work for him will either carry out his policies or resign if they disagree with their commander in chief, a former Pentagon official told Task & Purpose on condition of anonymity.

And since many defense experts have voiced their opposition to Trump, the president has a limited pool of candidates to draw upon, said the former official, who added he does not think the president is placing loyalty above competence when appointing civilians to the Pentagon.

The official said Cutrone's position as deputy assistant secretary for international security affairs should not include vetting Pentagon officials, which is normally handled by the White House liaison office.

Moreover, Cutrone's job should keep him so busy that he is not expected to have time to focus on personnel decisions, the official said.

Still, the official said he does have concerns about Tata over his reported extramarital affairs because it raises questions about his honesty.

“Michael Cutrone has decades’ worth of foreign policy and national security experience that will be an asset to Secretary Esper as he continues to build on President Trump’s success of rebuilding the military, combating terror, and protecting America’s interests abroad,” O’Malley told Task & Purpose.

When asked about O’Malley’s comments, Foreign Policy's Deputy News Editor Michael Hirsh said in a statement, “We stand by our reporting.”